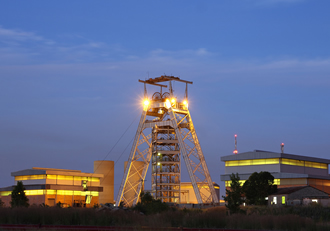 As a member of the Altra Industrial Motion Group, Twiflex has provided a parking and emergency brake for use on hoists at a gold mine in Elko County, Nevada. The VCSD-VR brakes are installed on a motor pinion, operating on a 1.168m diameter disc to produce a total torque of 128kNm.

This VCSD-VR is a spring-applied, hydraulically-released disc brake which has been designed for use in harsh environments, while providing superior performance in heavy duty dynamic and emergency stopping applications.

According to Steve Powell, Product Manager for Twiflex, when selecting brakes for mine hoists, it is important to consider factors such as the depth of the shaft, stopping profile, drum design and payload in order to calculate the braking torque required for each application.

For mine hoists, Twiflex typically aim to provide a braking solution which offers over two million braking cycles to meet exacting industry requirements. Twiflex’s VMS brake range for hoists produces up to 460kN braking force at a nominal 0.4 coefficient of friction and 2mm air gap (distance between pad and disc face).

In the Elko Gold Mine application, the braking speed is low at 500rpm, but the stopping time required is between 3-5 seconds, meaning that the peak disc temperature and power dissipation during the stop are high.

Steve Powell explained: “Our selection is based on providing enough braking torque to deal with the static out-of-balance load, in addition to considering the dynamic stopping duty. Modern control systems offer lower hoisting cycle times and high production levels, all of which affect the brake selection.”

The VCSD-VR is a large pad (28,990mm2 each pad) version of the popular Twiflex VCSD (15,700mm2 each pad); both brakes producing a braking force between 11-60kN. Due to its increased braking path, the large pad version enables higher rubbing speeds and greater thermal capacity (the ability to absorb and dissipate heat) to be achieved.

In addition to testing the braking torque at the start of each shift, hoist operators carry out visual checks of the calipers and condition of the disc surface. To assist with maintenance, Twiflex brakes incorporate a monitoring system to signal brake-pad wear and loss of braking force.

Twiflex is continually investigating new materials to meet the demands of the mining market and has invested in modern test equipment at its UK plant in Bedford. The company can provide full testing capability including a climatic chamber (-75 to 180°C), a fatigue room for brake cycling and a fully automated 40kW stop / start inertia rig for dynamic stopping. 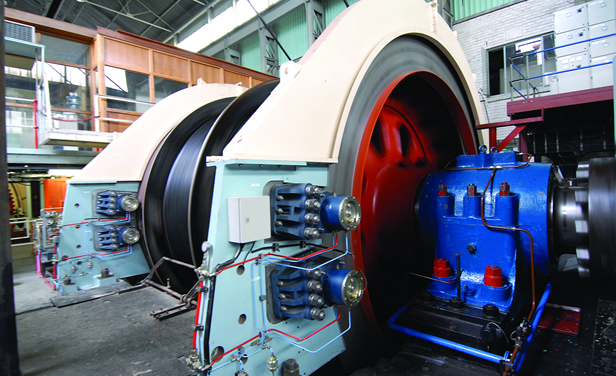 “All Twiflex modular brakes are subject to a cycling test and pressure test before leaving the factory,” explained Steve. “For mine hoists, all critical brake components undergo non-destructive testing. The main limitation for brake manufacturers is the friction material and the brake pad swept area, which needs to be carefully selected for the operating cycle.”

A unique Twiflex feature, which helps to reduce maintenance costs and contributes to risk mitigation on-site, is the ‘Parked Off’ design which is included on all Twiflex modular brakes. Unlike conventional mechanical lock-out systems where a nut and centre bolt arrangement is used to hold the spring force and prevent the brake from closing during maintenance, the ‘Parked Off’ feature actively removes the spring force, meaning when hydraulic pressure is removed there is no force acting on the pad and therefore no possibility of an unexpected closure.

Steve concluded, “The overall performance of the VCSD-VR lends itself to the application at Elko Gold Mine and we were able to engineer a solution which met all of the requirements while also delivering additional performance advantages such as faster installation and reduced maintenance costs.”