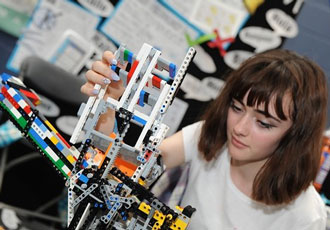 A team of young engineers from Wallace Hall Academy in Dumfriesshire, Scotland have been crowned champions of the Institution of Engineering and Technology’s (IET) FIRST LEGO League UK and Ireland competition.

A team of young engineers from Wallace Hall Academy in Dumfriesshire, Scotlandhave been crowned champions of the Institution of Engineering and Technology’s (IET) FIRST LEGO League UK and Ireland competition.

They were crowned champions at the competition final on Saturday in Bristol. They will now represent the UK on the global stage when they attend the FIRST LEGO League World Festival in Detroit, USA in April. Along with 12 other teams, they qualified for international finals which will be held in Hungary, Estonia and the US.

The IET runs this science and technology challenge, which is aimed at 9-16 year olds and tasks teams to build a robot to tackle a series of missions, and create an innovative solution to a real world problem. This year’s HYDRO DYNAMICSSM challenge was all about water - how we find, transport, use, or dispose of it.

The winning team impressed the judges with their advanced robotics skills, as well as their project, which is a sewage heat recovery system they have called a ‘Powerdrain’. Effectively it uses the heat from greywater, whether from showers, washing machines, washing up, or even the heat generated from the biological breakdown of human waste, and recycles it into heat for the home.

Team member, Scott Clancy said: “It’s unbelievable that we won the Champions Award. Hopefully we can raise the funds needed to go to Detroit to take part in the World Championship against teams from around the world.”

Team coach, James, Lees said: “It’s a fantastic achievement by the pupils involved who have worked really hard throughout the year. The team are looking forward to competing at the World Championship in Detroit and representing Scotland and the UK on a global level.”

The runners-up were Griffin Sprog, a team of students from the American School in London.

“There is a great need for young people with STEM skills to fill the next generation of engineering roles and the IET are excited to see such bright young engineering minds in action in the FIRST® LEGO® League competition.”

The event was the largest ever FIRST LEGO League UK and Ireland final with over 500 young people, 150 volunteers and 500 enthusiastic spectators attending. The teams were all keen to demonstrate their skills in robotics, computer programming, teamwork, research, problem solving and communication.

Other prizes awarded at the final included:

Runners up: Water Works from London

The IET is the operational partner for FIRST LEGO League in the UK and Ireland. Supporting the competition is part of the IET’s commitment to show young people the benefits of careers within Science, Technology, Engineering and Mathematics (STEM).