Taking the art of pizza making to the next level

Home > Around the Industry > Taking the art of pizza making to the next level
21st May 2020
Source: Sandvik Materials Technology
Posted By : Lanna Deamer 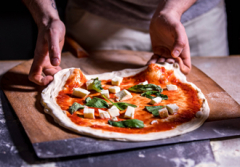 To achieve a cleaner, safer and quieter working environment, many industries have begun to upgrade their heating technologies, replacing their gas furnaces with electric alternatives. Unlikely as it sounds, this has led to an engineering business breaking the record for the fastest pizza in the world - which cooks in just 37 seconds.

While electric heating demonstrates clear benefits for applications such as aluminium and steel processing, Kanthal, an expert in heating technology and part of the Sandvik Group, has discovered one of its more unlikely uses.

Advanced heating technology used in a bespoke oven that make the world’s fastest pizza. In a typical home oven, a pizza will cook in around ten minutes at a temperature of 200°C. At a traditional pizzeria, a wood-fired oven can bake a Neapolitan pizza in as little as 90 seconds, at around 430°C. However, a wood-fired oven is typically heated once during the firing stage and temperature is difficult to control.

To demonstrate the efficiency of its heating technologies, Kanthal has taken the art of pizza making to the next level. By implementing its expertise, the company created an electric pizza oven that can cook pizza in just 37 seconds - without compromising quality.

Based on the infrared heating principal, Kanthal’s pizza cooker uses electromagnetic radiation to heat up the oven’s contents. The compact element-design, often referred to as porcupine elements, makes it possible to pack a large amount of power into a small space. Kanthal’s oven uses eight of these porcupine elements, which are made from iron-chromium-aluminium Kanthal AF alloy, each running at a temperature of 900°C.

In addition to the elements themselves, the oven also features several reflectors to aid the even distribution of heat and ensure a uniform bake. Kanthal AF is typically used in electric heating elements in industrial furnaces and home appliances, such as in open mica elements for toasters, suspended coil elements in fan heaters and in coils on moulded ceramic fibre for cooking plates with ceramic hobs. In these settings, the alloy operates in temperatures up to 1,300°C.

“I always enjoy a challenge and, knowing that heat plays such a crucial part in pizza making, I saw this experiment as a perfect match for Kanthal,” Holmstedt said. “Because our heating technology can produce heat up to 1,850°C, hitting a high temperature wasn’t an issue. However, pizza making is a precise craft that requires care to get the perfect crust, so we needed to take full advantage of our technology to provide a high temperature that we could easily control.”

Beyond pizza, the project demonstrates Sandvik’s commitment to finding new ways of carrying out age-old processes. Electric power doesn’t only provide faster and more consistent heating, the environmental benefits of electric heating are also significant. Sustainable innovation underpins business activity across the Sandvik Group, which has set a goal of halving its carbon dioxide (CO2) impact by 2030.

“Pizza ovens are not part of our portfolio,” explained Holmstedt. “Yet, it was important for us to showcase everything that advanced heating technology can achieve. For instance, we track 34 installations of furnaces, which we’ve helped transform from gas to electric, and have calculated CO2 savings of over 160,000,000 kilograms so far - a figure that rises almost every second.

“Kanthal may not continue to create record-braking pizza, but we hope that the legacy of the project teaches others about what can be achieved when combining innovative technology with a mindset that says anything is possible.”