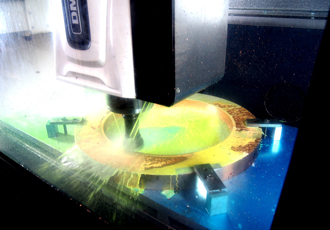 A disastrous fire at P Patterns in Brierley Hill turned out to be the catalyst for a new and stronger company with some help from DMG MORI. P Patterns produces medium to large patterns for the foundry industry in iron, copper beryllium and model board.  The patterns are used for high volume parts, mainly in the rail, automotive and earthmoving industries for applications such as suspension parts and wheels which are ultimately delivered to major OEMs including Caterpillar and Scania.

Although some of the patterns are for die casting, the majority are for sand casting in spheroidal graphite cast iron for highly stressed components.

In August 2018, Phil Hancox the Managing Director of P Patterns had a call to tell him his factory was on fire. Rushing to the scene, he saw his life’s work going up in smoke. Fortunately, nobody was hurt, but the building and the machinery were completely destroyed from a combination of water and fumes from the fire that ate into the metal of all his equipment.

Phil Hancox said: “We were well covered by insurance and we also had business interruption insurance which enabled us to keep all our employees on full pay while we set about rebuilding the company. We also owned the building next door, which was used for storage, so our first tasks were to reassure our customers and start putting the necessary power and services into the storage building so that we could get working again as soon as possible.”

Prior to the fire, P Patterns had a DMG MORI 635, which they had had for eight years and which had been running continuously without a breakdown. Additionally, the company had a number of other machines including a machining centre with 1.5m capacity. Phil Hancox adds, “The DMG MORI machine was very reliable, fast, accurate and produced a superior surface finish. Because we were so pleased with the machine, we decided to replace all our machining centres with DMG MORI equipment.  Although this would cost us more than like for like replacement we decided that this was an ideal time to make the extra investment which we judged to be definitely worthwhile for the long term future of our business.”

As soon as he had confirmation from his insurance company Hancox explained the urgency of the situation to DMG MORI and placed orders on 17th September for a CMX800V and a DMC1450V. The CMX800V arrived on 18th November and the DMC1450V in December. The first machine was up and running just 9 weeks from order.

During the disruption, Phil Hancox used his contacts in the industry to provide continuity of manufacture for his customers, retaining their business for the future. He said: “DMG MORI carried out pre installation checks, making sure that there was sufficient room to position the machines and that all the services were in place. The actual installation went very smoothly and was exactly on time.”

Hancox said: “We are taking delivery of a CMX1100V in the next few weeks, so our CNC machines will be consistent and DMG MORI throughout. We now have new faster, reliable and more accurate machinery which will last for at least 10 years. Additionally, the machines give us extra capacity to cover the large patterns we produce. Our customers have been impressed with the new machinery and the improved quality and we anticipate that this will lead to new customers and more business from our existing customers. The fire forced us to be resourceful in overcoming the challenges it presented and gave us the chance to turn a disaster into a positive outcome and build a stronger business as a result. DMG MORI’s fast delivery times certainly were a big help.”