Heat and power is necessary to boost sustainability 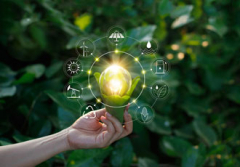 Combined Heat and Power offers several cost, efficiency and sustainability benefits that can be realised by manufacturers with zero capital expenditure. James Sopwith, Group Strategic Account Director at the multidisciplinary engineering business, adi Group, argues that being seen as a business that takes its climate responsibilities seriously can only improve your consumer and commercial relationships.

Few would disagree that we live in extraordinary times. COVID-19 is still wreaking havoc on society and the economic outlook is bleak. But, as part of his recovery plan, the Chancellor, Rishi Sunak, is promoting what he calls a ‘green industrial revolution’ aiming to boost investment in clean energy to help create jobs.

Now, the food and beverage industry may look at the pandemic and quite rightly say it evolved at pace to the new environment and ensured the nation didn’t go hungry. For that we should all be thankful but, given the size and importance of British food and beverage production, it is incumbent upon the sector to play its part in a green recovery plan.

The UK food chain, for example, accounts for approximately 10% of all industrial energy use in this country and burns the annual energy equivalent of 2.8 million tonnes of oil to heat, process and move products. And, of that, as much as 33% is electricity drawn from the grid, so in the context of a green revolution there is a solid case for food and drink manufacturers to reassess how they generate the energy they require.

While COVID-19 is likely to remain a real concern for the foreseeable future, it is not the only issue the sector must resolve in the years ahead. Brexit could well exert sizeable influence on the supply chain in the medium term and on regulation looking a further ahead.

And, with recession a likely prospect, consumer budgets are likely to be strained for some time, so manufacturers will need to adapt further to potentially significant shifts in demand and downward pressure on prices.

Cost cutting will be high in the agenda and brands will need to continue to demonstrate to increasingly ethical consumers that they’re doing the right thing on plastics, potentially having to re-engage those who have reverted to buying packaged products they can wipe clean.

With many companies in survival mode having put sustainability on the backburner recently and some climate-friendly regulations having been relaxed in different parts of the world to help struggling businesses, there is lost ground to make up.

So, in my view, the food and beverage sector has little option but to commit to serious innovation in order to face down what could be a prolonged storm. And, I believe the industry should embrace one particular technology to make significant gains in a number of important areas.

Next to electricity, conventional gas-fired power plants generate immense heat but the process wastes the great bulk of it. In contrast and with some innovation, CHP can harness that heat energy and enable manufacturers to apply it across an enormous range of temperatures - from -40°C to +290°C - meaning it can be put it to use in common steam, heating and cooling processes in manufacturing.

With the power generated charged to manufacturers at a lower rate than traditional grid power and less carbon burned to achieve the same or better production outcomes, there are significant wins in terms of cost, efficiency and the climate.

The British government, for example, estimates that operators can typically save up to 20% on their energy bills and reduce their carbon emissions by as much as 30%. But many of those potential operators have, in the past, been reluctant to incorporate CHP into their operations.

Significant capital investments are going to be difficult to justify in these straitened times. As worthy as our sustainability, cost and energy goals are, manufacturers understandably balk at the thought of a sizeable capex project, when the economy has stalled.

Yet there are new off-balance finance strategies that sweep that concern aside. Our business, for example, recently reached agreement on a multimillion project that will see a manufacturer reduce both its carbon footprint and its cost base, with no need whatsoever for capital expenditure.

That’s a win for the business itself but also for the environment and for customers who, in the current circumstances, could very well appreciate some of the associated cost savings being reflected in product prices.

CHP, on the other hand, drives energy costs down and increases fuel supply security, freeing manufacturers from the shackles existing energy infrastructure has often put on their ambitions to scale up.

We can give the British public a hand, allowing them to get even better value out of the £188bn they spend on food and drink each year. Enormous amounts of energy can be saved and the heat generated in the process can be put to productive use rather than disappearing into the ether.

Switching to CHP also sends a strong message to the market, the supply chain and to consumers - that your business is not only serious about its obligations but is thinking creatively to go beyond them.

Now, nobody is saying CHP is any kind of panacea. The challenges ahead will require a blend of solutions to deal with the challenges faced by food and beverage manufacturing.

But I believe this technology has a big role to play. Our industry has to solve some real puzzles, as we look to the future, and CHP is a clue we would do well not to ignore.