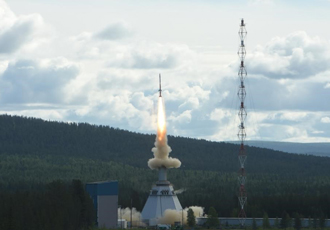 Graphene Flagship partners, Université Libre de Bruxelles, University of Pisa and the University of Cambridge, in collaboration with the European Space Agency (ESA) and the Swedish Space Corporation (SSC), launched a rocket into space from Kiruna, Sweden back in June. The experiment aims to test the possibilities of printing graphene inks in space. Studying the different self-assembly modes of graphene into functional patterns in zero-gravity will enable the fabrication of graphene electronic devices during long-term space missions, as well as help understand fundamental properties of graphene printing on Earth.

The MAterials Science Experiment Rocket (MASER) 14 was launched from the European Space Centre in Esrange, Sweden, thanks to a collaboration between the ESA, SSC, and three Graphene Flagship partners. The objective is to test the printing of graphene patterns on silicon substrates in zero gravity conditions.

Graphene Flagship partner University of Cambridge pioneered the use of liquid phase exfoliation to prepare graphene and related materials inks. Such inks are now used to print all sorts of devices, ranging from flexible electronic sensors, gauges, to batteries and supercapacitors and many others. Graphene-inks are already in the market, and many Graphene Flagship partner companies and spin-outs are commercializing this technology. This first experiments with graphene in space, led by Graphene Flagship partner Université Libre de Bruxelles, will allow to better understand the fundamentals of the printing process on Earth, by removing the presence of gravity and studying how graphene flakes self-assemble. Most importantly, these experiments are a first step towards making graphene printing available for long term space exploration, since astronauts may need to print electronic devices on demand to cope with long-term missions. Graphene-based composites may also be used to offer radiation protection, another compulsory requirement to enable manned space explorations, for example during Mars-bound missions.

This research follows the zero-gravity parabolic flight campaign that took place in May 2018. The earlier experiment enabled 24 seconds of microgravity to test these same properties and the quality of graphene dispersions prepared by Graphene Flagship Partner University of Cambridge.

Taking this research a step further, the flight of the MASER 14 rocket launched 250km above the Earth surface from Esrange, Sweden, enabled more than six minutes of microgravity, giving researchers additional time to carry out their tests, which will validate graphene’s self-assembly properties.

“Testing the evaporation of droplets seeded with graphene is an important step towards the comprehension of phenomena involved in coating technologies and energy applications and an enabling factor in the commercialisation of this material for creating a new life-support ecosystem in future human space exploration,” explained Carlo lorio, leader of the space activities carried out by the Graphene Flagship, and a researcher at Graphene Flagship partner Université Libre de Bruxelles. “There is no better way to validate graphene’s potential than to send it to the environment it will be used in,” added Iorio.

“Graphene has unique conductivity properties that scientists are continuing to take advantage of in new processes, devices and in this case, coatings. Experiments like these are fundamental to graphene’s success and integral for building the material’s reputation as the leading material for space applications,” he says.

The importance of space exploration for the Graphene Flagship is underlined by the organisation of the second workshop in collaboration with ESA at Graphene Week 2019, which was held in Helsinki, Finland, from September 23 to 27.. This workshop, chaired by Carlo Iorio, covered a variety of topics, all of them related to new graphene devices and technologies that will boost human space exploration.

“These experiments in zero gravity have already resulted in patent applications, as well as in the interest or large companies, such as Leonardo. Space is the limit for graphene. Or, is it?"