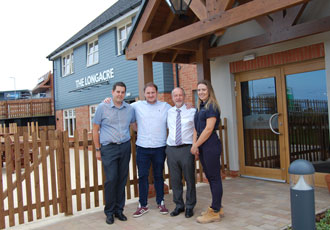 Seymour Civil Engineering and Barnes Construction have celebrated their respective 40th anniversaries with the completion of a £2m public house development in Skelton. The Longacre is the latest pub development from Marston’s PLC, located at the newly-developed Skelton Park on Pheasant Fields Lane.

Brought in as the civil engineering contractor for the project, Seymour Civil Engineering completed the earthworks for the development, as well as laying the foundations, installing the drainage system, creating a gabion wall around the site perimeter to manage soil erosion and laying the kerbs, paving, new entrance and 50 space car park.

Sarah Jopling, Site Manager at Seymour Civil Engineering, said: “This project in partnership with Barnes Construction has been a real triumph. It was completed on time and on budget and to see the pub finished and open to the public is something both the teams from Seymour and Barnes are very proud of.

“This is a special year for both companies as we’re both celebrating our 40th anniversary. To be able to work alongside Barnes, a company that is so well respected in the industry and has been growing from strength to strength for 40 years’, is an honour.”

David Faichney, Senior Contracts Manager at Barnes Constructions, said: “This is the first time we have partnered with Seymour Civil Engineering and the company’s professionalism has ensured the project has been a real success.

“We have built up a fantastic relationship with the team we’ve worked alongside on site. We have bounced off each other perfectly, and their commitment to quality, health and safety onsite, and completing work on time has been very impressive and has made them a real pleasure to work with over the past seven months.”

The £2m invested by Marston’s PLC, has brought a family-friendly pub to the East Cleveland shopping park, as well as bringing over 45 new jobs to the area.

As one of the North East’s leading civil engineering contractors, Seymour Civil Engineering is no stranger to the East Cleveland area. Last year the firm partnered with Skelton Villages Civic Pride, Redcar and Cleveland Council and the Heritage Lottery Fund on a scheme to regenerate Skelton town centre.

Jordan Quincey, the Project Manager for the Marston’s Longacre pub development, said: “It’s fantastic to see the Longacre ready to open, and we’re exciting for next week when the doors officially open to the people of Skelton.

“Marston’s looks for sites with large infrastructure and the site at Skelton fitted the bill perfectly. Alongside the Skelton Park shopping complex, Asda supermarket, and the new Aldi store that is under construction, we felt there was a real opportunity for a family-friendly pub.”

Seymour Civil Engineering is also involved in the construction of the new Aldi supermarket on the same site, which is due to open in November 2018.