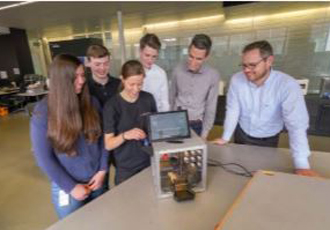 Good specialists are the backbone of any company. Employers therefore have to come up with novel ideas to make sure they do not lose these important assets. But how can employers raise their appeal in the age of digital transformation? How should companies recruit junior staff and how can they retain their existing employees? EMO Hannover 2019 provides answers to these questions.

Agile working, IT competence and lifelong training – today's employees are expected to command a wide range of complex skills. In addition, previous forms of collaboration are losing significance due to the new possibilities offered by digitalisation. Companies must face up to these changes. One of the pioneers in this field is Trumpf GmbH + Co KG in Ditzingen. The machine tool manufacturer opened its doors to the agile community for the first time at the beginning of April. The 1st Agile Days event was devoted to solution-oriented discussions on the current trends and challenges surrounding agile working. What does that mean in concrete terms?

"Our aim is to strike out and seize the initiative. Not only by reacting to the rapidly changing world, but also by actively shaping it – at the corporate, team, and personal level," explains the company. And so, interested parties were invited to Ditzingen for two days of talks. The focus was on four main topics: Customers and Innovation, Roles and Competencies, Strategy and Goals as well as Organisation and Culture.

Digitalisation also requires changes in the culture
Keep up with digitalisation, shape it according to your own needs and abilities while continuing to use the tried and tested – then it can work. Prof. Wilhelm Bauer, Head of the Stuttgart-based Fraunhofer Institute for Industrial Engineering IAO and Technology Officer of the State of Baden-Württemberg, believes that three steps are needed for successful digitalisation: "Companies must first recognise that digitalisation involves significant transformation of the economy. Second, they need to develop their skills, and third, they need to have the courage to tackle things head on."

One reason why digitalisation has not yet been adequately addressed by companies is the booming economy: "When order books are full, many companies don't take the time they need to consider digitalisation. Yet when business is going well, that is when the necessary resources are available."

For Oliver Maassen, Trumpf's Head of Human Resources, digitalisation also requires a change in the culture: "The digital transformation demands that you give yourself the freedom to make mistakes which you can then learn from," said Maassen. Agile working methods are helping to establish this new attitude towards work at Trumpf. "The structures must be elastic enough to accommodate fresh, creative ideas, such as when new blood comes into the company," Bauer adds. "Top-down and bottom-up – if the change is initiated from both directions simultaneously, then it becomes mutually self-reinforcing," Bauer continues.

But digitalisation also means changing our understanding of leadership. "The main task for 'Boss 4.0' will be on developing employees' skills," said Maassen. "At the same time, managers should develop their own skills and obtain regular feedback. The key to success is communication."

A future-oriented employee retention strategy begins with training
One thing is certain, though: only well-qualified employees can guarantee that companies develop successfully, especially in view of the many changes taking place in the world of work. One way to achieve this is to train them yourself.

Over the last ten years, the Youth Education and Development Foundation has developed into an important strategic partner for vocational training in Germany. Strengthening the vocational orientation of general education schools, meeting the demand for skilled workers in the entire mechanical and plant engineering sector and the timely transfer of new technologies into vocational training are its main focuses. Accordingly, topics such as Industry 4.0 and mobile learning are also on the Foundation's agenda. It runs various workshops in which it provides mechanical engineering teachers with information and methods for dealing with these future topics. One example is Mobile Learning in Smart Factories. This is a mobile app that can be used in different work and learning environments. It presents context-relevant information from the Internet in an educationally meaningful way. The target groups are apprentices and their trainers as well as young people starting out on a career in mechanical engineering.

Peter Bole, Head of the Foundation, confirms that the services are gratefully accepted: "Since the Foundation was established, more than 7,300 trainers and teachers have been helped over the past ten years to meet future challenges in seminars lasting several days. The purpose is to ensure that the recent technological changes which have taken place in mechanical engineering are also included in the vocational training. We were also able to convince more than 120,000 young people of the appeal of the industry and its opportunities in the Special Youth Show at the last EMO Hannover and other leading trade fairs." He emphasises that digitalisation and Industry 4.0 are increasingly becoming integral parts of training. "The Youth Education and Development Foundation has responded to the challenges of digitalisation by setting up three ground-breaking projects: testing an additional qualification for digital manufacturing processes on behalf of the Federal Institute for Vocational Education and Training, setting up an innovation and transfer network in Baden-Württemberg to implement digitalisation in vocational education and training, and implementing a NRW-wide pilot project to implement Industry 4.0 and digitalisation. This involves providing training to 600 trainers and teachers. In a second step, these additional Industry 4.0 skills are then passed on to around 1,200 trainees."

Bole, the Head of the Foundation, recommends that companies use digital methods to recruit trainees. "Anyone interested in recruiting young people needs to arouse their interest. Using modern communication opportunities such as social media channels is one way of raising your appeal and attracting potential recruits. It can be assumed that the degree of digitalisation found in the working environment will increasingly become a decisive factor for digital natives. Companies should bear this in mind when developing their training, and communicate it through the channels I already mentioned."

Agile structures require cross-departmental cooperation
Agile structures require employees from different areas to work together on projects. At Trumpf, students from the Baden-Württemberg Cooperative State University practise this form of cooperation during their training. In the first year of their apprenticeship, they are given the task of developing a product – including everything from model-building and construction through to marketing. The aim is to teach them how product development and the marketing process work.

The so-called Trumpf Cube which they are developing should be 30 centimetres in height, length and width. The eventual function of the product is left to the students to decide. They work on the task in teams of five to six, made up of students from the fields of mechatronics, electrical engineering, computer science, industrial and mechanical engineering. The project is divided into two phases: an initial workshop, in which each team designs a cardboard model of the cube, and then a second step in which they create a functional prototype. Each team receives the same budget and can spend it as they see fit. "The students in the Digital Key Box project group, for example, used their budget to buy small motors to drive a gripper arm. The gripper arm automatically ejects the keys from the cube at the push of a button via a 3D-printed ramp," says Torsten Klaus, Head of Technical Training at Trumpf in Ditzingen, describing a practical example.

People still play a key role in the digital age
By mid-2018, the WGP (Scientific Society for Production Technology) was already concerning itself with the social consequences of digitalisation and networking in German industry. In their Industrial Workplace 2025 Position Paper, the authors discussed this development and created a new model for analysing the degree of automation in industry. It shows the areas in which there is need for action. "Every industrial revolution – including Industry 4.0 – brings immense social upheaval with it," says Prof. Berend Denkena, President of the WGP and Head of the Institute of Production Engineering and Machine Tools IFW at the University of Hanover. "As an alliance of German professors of production technology, we want to contribute our know-how in order to reduce the human distress caused by this upheaval."

The position paper concludes that we still need both: production technology (in the form of automated systems) and people. The optimum ratio needs to be found between human work and automated production technology. According to the WGP, the developments in digitalisation and the resulting changes in the degree of automation and autonomy of production systems are placing new demands on the skills and abilities of people working in production. "In addition to the increasing demands on production employees, the availability of suitably qualified employees will also play an important role in the future," it says. This in turn is influenced by demographics and the increasing heterogeneity of the qualifications required for entering training.

Oliver Maassen from Trumpf and WGP underline that this is an issue which society as a whole needs to address: "We need greater political support in the areas of education and training. Digitalisation must become a fundamental component at all levels of education, from primary to tertiary."Trumpf, the WGP and the Youth Education and Development Foundation will also be showcasing Industry 4.0 solutions in September at EMO Hannover.