The salient answers on umati 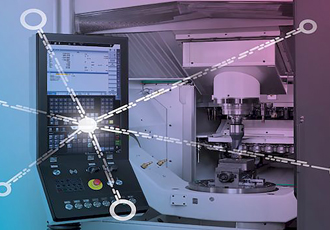 With application-tailored implementation of the umati interface for the machine tool sector, since 2017 clear contents and technical key data for translation into hands-on reality have been drawn up. What this means specifically, and what visitors can expect to see at the EMO Hannover, are explained by three experts.

The three experts are, Götz Görisch, who is responsible at the VDW for the field of digitisation and Industry 4.0, and is Chairman of the umati Joint Working Group.

Secondly, Bernd Zapf, who is responsible for Development New Business and Technology at Gebr. Heller Maschinenfabrik GmbH in Nürtingen.

And finally, Andreas Wohlfeld is Lead Architect Smart Factory at Trumpf GmbH and Co. KG in Ditzingen, and heads the modelling group of the umati Joint Working Group.

Why did the companies and the VDW initiate umati?
Görisch: Following a workshop in the VDW themed around the issues of Industry 4.0, held in early 2017, it clearly emerged that things were definitely moving in terms of standardisation. After some market research, however, it also became clear that for the machine tool sector none of the proposals involved was usable. On occasion, standards had already been agreed between machine tool manufacturers and customers from the automotive industry, but only on a bilateral basis. This meant that very extensive resources in the companies were channelled into developing and maintaining the various customer implementations concerned. The intention is for the global interface umati to replace these, thus also creating capacities for developing new functions with customer benefits.

Why has OPC UA been chosen as the communication standard?
Görisch: This question was very intensively discussed and examined during the initial months of the project in 2017. In the past two to three years, OPC UA has been experiencing a veritable boom, and is tacitly acknowledged as thestandard in industrial communication. OPC UA utilises internet technologies and protocols. Basically, it specifies how communication is handled. At the same time, sectorally specific expertise enables users to define, in what are called Companion specifications, the details of what is communicated. This means: the specifications provide a kind of sectorally specific dictionary.

Why is standardisation not being performed at other organisations, like ISO or IEC?
Görisch: OPC UA, as a fundamental specification, is already an IEC Standard (IEC 62541), meaning a standard published by the International Electrotechnical Commission (IEC). The Companion specifications are at present still so development-intensive, and are so urgently required, that traditional standardisation procedures are not fit for purpose here. As soon as the Companion specifications have stabilised, the long-term aim is to adopt them in IEC/ISO Standards. The VDW is here already actively involved in the preparatory work in ISO/TC 184 – a body at the ISO (International Standardisation Organisation) that draws up standards in the field of Automation Systems and Integration. In the shape of OPC UA, the basic implementations with the corresponding tools are already available, whereas in a normal standardisation process lasting three to five years in the end you still don’t have any implementations with the corresponding tools.

How does the Showcase function?
Görisch: The Showcase at the EMO Hannover 2019 demonstrates that machines from different manufacturers featuring umati can be securely, seamlessly and effortlessly connected to the customer’s IT systems. For this purpose, we have published a simplified version of the umati Companion specification’s draft, with the aim of reducing the amount of implementation work at the individual participants involved. The machines connect themselves to an aggregation server, which at companies is typically installed on the shop-floor level. On this server, the data from all machines are grouped together and made available to an OPC UA client in the destination application. Since we as the VDW cannot build a democase of this kind for the fair all by ourselves, we are being assisted by T-Systems. At the same time, many clients (applications) will link up to this server, a special feature, since most participants also themselves possess a digital product for utilising the data. In addition, we have brought on board relevant added-value service providers like Adamos or Symmedia for participation.

How extensive is the Showcase’s data record?
Görisch: For the demonstration scenario, we took the draft version of the Companion specification, and defined a typical machine tool. This reduces the implementation work involved for the manufacturers concerned, and the scenario contains everything that has already been defined in the standardisation work. The data enable most of the ten use cases specified for the first version to be handled – focused on the machine chosen for the Showcase.

When is the standard scheduled for completion and publication?
Görisch: If it were up to me, before the end of this year. However, we still have a lot of consultation work ahead of us, and at the same time, after submitting the release candidate to the OPC Foundation we have deadlines to comply with for comments and objections. So a realistic date for publication is early 2020. Which doesn’t mean that initial implementations can’t already be deployed. Always against the background, however, that modifications can and must be made.

When can actual products be anticipated?
Görisch: I am confident that the machine tool manufacturers will at the EMO Hannover be discussing with their development customers initial specific pilot implementations. The delivery times involved, however, will indubitably extend into next year. At the same time, the requisite testing and certification preconditions have to be put in place by the umati project team – with a view to dependable quality. And not least, the umati product for machine tools and software products has to be given its final description. Against this background, I would assume we’ll be seeing the first products next year.

How the machine tool manufacturers Trumpf and Heller are contributing to the umati Showcase in Hanover is explained by Bernd Zapf and Andreas Wohlfeld.

What is your company’s input for the Showcase at the EMO Hannover?
Zapf: Heller will at the fair be providing a total of four data suppliers featuring the EMO umati data model: one five-axis machine on the Heller stand, two training machines, of which one will be exhibited on the VDW’s stand, and another five-axis machine that is installed at Heller’s production facility in Nürtingen. These machines will provide the data for the Showcase. In addition, Heller is a member in the VDW’s Core Group for designing and trialling the umati interface and for liaising with Siemens.

Wohlfeld: We shall be connecting individual machines to the data hub as a showcase for the fair. Trumpf is, for instance, providing the VDW with a connected marking laser. Besides the machines in the Showcase, we are supporting the VDW’s umati-themed events in our role as a member of the VDW’s core group and the modelling group of the Joint Working Group. We are thus underlining our declared aspiration: it was important to the umati group to opt for a technology that offers maximised benefits for the new interface. Thanks to semantic self-description of the data in the information models, the data are not only structured, but provided with meanings, and thus significantly upgraded. And not least OPC UA is the standard chosen for communication in the framework architecture for industry 4.0 (RAMI4.0).

What’s the status of the standardisation work for your focus?
Zapf: The standardisation work is very elaborate, complex and time-consuming. Numerous opinions have to be obtained from different companies. Basically, what’s needed is abundant willingness to compromise on the part of everyone involved. Furthermore, an up-to-the-future data record is being developed, which takes time and necessitates a lot of experience. From Heller’s viewpoint, the current modelling status covers about 90 per cent of our requirements.

Wohlfeld: Trumpf has for several years now had its own in-house standard in terms of OPC UA. We see umati as the next logical step on the path leading to the cross-manufacturer smart factory. We’re working hard on this. Approval of the companion specification by OPC Foundation Products is the next major objective. We should then also be able to put products on the market. Among the vendors, the standard will be successively disseminated. The tempo here essentially depends on how quickly they integrate the standard in their products.

What specific pilot projects can be demonstrated at the EMO Hannover?
Zapf: Heller will be demonstrating at the EMO, with the machines connected, the entire EMO umati data record. In our estimation, this already covers about 40 per cent of the final data record. We supply this data record with MDA/PDA signals from our presentMDA/PDA interface, and in addition have more signals available which we have so far not been able to deploy. These will be contributed by the umati interface. We will thus in future be creating a link from the present MDA/PDA interface at our machines to the new and future requirements. This can, for example, be the acquisition of machine status conditions.

Wohlfeld: At the EMO, we shall in the framework of the showcase be exhibiting a pilot with the Trumpf machine apps, which among other things visualises the machine status.