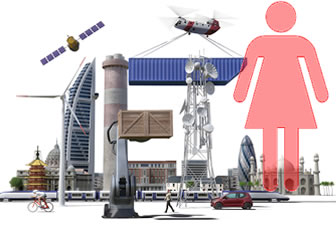 Marking International Women’s Day, the Institution of Engineering and Technology (IET) has launched the call for entries for its 2017 Young Woman Engineer of the Year Awards (YWE), which will be an extra special celebration as this year is the 40th anniversary. The awards identify and celebrate the best female engineering talent and demonstrate to young women and girls across the UK that engineering is a creative, diverse and exciting career.

It has never been so important to recognise and showcase outstanding female engineers. Statistics from the most recent IET Skills and Demand in Industry survey shows that women represent only 9% of the engineering workforce in the UK.

To help inspire the next generation of female engineers and to raise awareness of the Awards, the IET’s social media campaign #9percentisnotenough has been encouraging engineers to share a picture with their hand raised to the fact that only nine percent of women make up the UK’s engineering and technology workforce – and to also highlight that engineering is a realistic and inspiring career for girls.

The campaign has already captured the imagination of both female and male engineers (and non-engineers) across different disciplines and generations, as well as politicians and TV personalities.

President of the Institution of Engineering and Technology, Jeremy Watson CBE, said: “Women are woefully underrepresented in engineering. In a profession with a serious skills shortage, this represents a problem for the economy as well as for diversity.

“So to coincide with International Women’s Day, we want to make it clear that engineering is a fantastic career for women. Not only that – but there are thousands of female engineers doing amazing things that are changing our world.

“The Young Woman Engineer of the Year Awards celebrates our best female engineering talent and finds those all-important engineering role models to inspire more girls - and boys - to go into engineering.”

Current IET Young Woman Engineer of the Year, Jenni Sidey, added: “The IET’s efforts in diversity in the field are not just good for the profession but a necessity for the UK to be a competitive innovator and global technological leader.”

The deadline for entry to the IET Young Woman Engineer of the Year Awards is 7th July 2017.