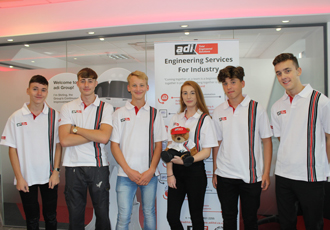 A young female engineering apprentice is celebrating after being named as one of the top 50 women engineers in the UK. Talented Abbie Beaver, 17, became the first female trade apprentice taken on by leading West Midlands multi-disciplinary engineering firm, the adi Group, when she joined last September.

Now she has been recognised by the prestigious Women’s Engineering Society (WES) after exceeding expectations in her current role. She has been selected to be one of the WES Top 50 Women in Engineering (WE50) 2019: Current and Former Apprentices.

Abbie, who is based at adi Group’s Kings Norton HQ, Birmingham, said she was thrilled to be recognised on the list.

“When I first came here I had plans to get to grips with the working environment and pursue something I enjoy, which is what has happened,” she said.

“Having been here over two years now and gone through the pre-apprentice scheme, I’m really enjoying my job. I would definitely encourage other girls to consider going into engineering.”

The WE50, first launched in 2016, aims to address the current skills shortage facing the UK engineering industry. Highlighting the exceptional work being completed by former and current apprentices, past winners include Professor Karen Holford CBE, from the School of Engineering at Cardiff University, and Dawn Childs, group engineering director at Merlin Entertainments.

Elizabeth Donnelly, the chief executive officer of the Women’s Engineering Society, said Abbie’s place on the list is testament to her hard work from a young age: “Abbie Beaver has been a keen advocate and spokeswoman for women in engineering since her school days.

“Not only has she flown the flag for tomorrow’s engineers, National Apprenticeship Week and the WES LottieTour, she was also selected by WES to be one of just six female engineers in our Lottie Doll poster campaign to inspire primary age audiences into engineering.

“Abbie continues to encourage and inspire many women to get into engineering by showing her own capabilities. WES is delighted that Abbie is one of our 2019 Top 50 Women in Engineering and we look forward to seeing her career progress in years to come.”

James Sopwith, adi Group Strategic Account Director, said it was a huge honour for Abbie and the company to have been recognised by the WES.

“In just a short space of time, Abbie has not only proven consistently that she has an excellent aptitude for engineering but also demonstrated many of the key characteristics that have helped make adi what it is today.

“This is a company with nearly 30 years’ experience of self-delivering multi-disciplinary engineering solutions to many of the biggest brands in the world. Thanks to our pre-apprentice and apprenticeship schemes, Abbie already understands our ‘right first time’ culture and we very much look forward to helping develop her fledgling career.”

The adi Group has consistently provided young people with a platform to develop a career in engineering, with both its pre-apprentice and apprentice schemes regularly taking on promising pupils from North Bromsgrove High School and the wider West Midlands.

The group has already exceeded its commitment to skills development, made as a member of The 5% Club, to employ five per cent of its total workforce as apprentices by 2020.

Additionally, the firm has twice been publicly praised for its youth schemes by Prime Minister Theresa May, who visited the company last October and name-checked adi in Prime Minister’s Questions just last week.