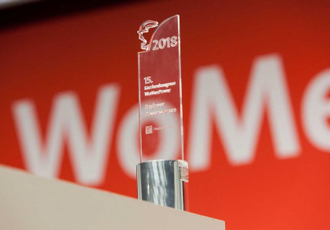 This year will see Deutsche Messe again presenting the Engineer Powerwoman career achievement award during the WoMenPower congress at HANNOVER MESSE (in Hannover, Germany). It will be the sixth time that Deutsche Messe has presented the award. Each year, the award honours a woman who has made a mark or played a key role in innovation within an organisation through her dedication, ideas or work in the fields of science, technology, IT, engineering or mathematics.

Applications are open to all companies and institutions from Germany and abroad, and close on 12 March 2018. Each participating organisation can nominate only one candidate.

Prior to that she served as Project Manager for Autonomous Driving in Robert Bosch's Chassis Systems Control unit. She holds a degree in electrical engineering, is a committed advocate of new technologies that improve traffic safety, and over the years has championed the cause of autonomous driving at numerous conferences and panel discussions and on joint working groups with lawmakers and regulators.

Aranda Colás also mentors young girls and women university students, inspiring them with a passion for technology and encouraging them to consider careers in the STEM professions.