Marstons is chilling with Burkert 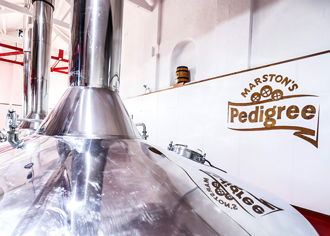 For Marstons brewery in Burton upon Trent, Staffordshire, replacing control valves on the main chiller system would improve reliability. However, the process control components were initially looking expensive - that is until a call to Burkert revealed a much more cost-effective solution. Replacing ageing equipment or expanding a production line are suitable opportunities to take stock of new technologies and how they can improve productivity and reduce project costs.

Marstons has been expanding its production facilities to cater for the increased popularity of craft beers and part of this process called for new chilled storage tanks to be installed. In addition, the pipework and control valves on the existing storage tanks had reached the end of their service life and were due for replacement.

Process assessment
The initial enquiry from the production engineers at Marstons was to source some large, electrically actuated control valves, 84 of them in fact. The valves are designed to control a water/glycol mix that cools the storage vessels. As part of a hygienic process, they needed to be stainless steel and the threaded connecting pipework was 2” (50mm) in diameter. The size and design of these valves meant that they would command a premium price, no matter which manufacturer supplied them.

Burkert was keen to offer a more cost-effective solution and suggested that one of its engineers visit the brewery to understand the objectives of the process, the requirements for the control valves and the structure of the existing process control system. During the site visit, it transpired that there was an aversion to installing pneumatic controls because of perceived high costs, following a recent quote from another process control manufacturer.

The Burkert engineers explained that all the aims of the new process could in-fact be achieved using pneumatic valve islands and control valves with a significant saving compared to the electrically-actuated valves. The Burkert solution included its latest valve island, the Type 8652, that would be built into a European Hygienic Engineering and Design Group (EHEDG) panel, enabling it to be positioned close to the process.

Paired with Type 2000 valves, also in stainless steel with threaded connections, each fitted with a CLASSIC actuator, the whole reduced-cost package could be offered with a 2-year warranty, direct from Burkert.

Building for the future
The Type 8652 AirLINE has been optimised for installation at the bottom of a control panel, which in this case, was custom-built by Burkert at its Systemhaus in Germany. The compact nature of this valve island would normally reduce the size of the panel required, but in this case, the brewery wanted to include additional space for future expansion as well as its own input/output systems. To accommodate the future plans for the site, Burkert populated all the valve island control modules, allowing the unused ones to be easily connected as the application expanded.

Due to the choice of positions for the air supply port on the valve island, the air preparation unit, which consists of a filter and a regulator, could also be included within the panel without additional connection points. Traditionally, this would have been external to the panel, but this design protected it from any washdown processes.

Greg Wainhouse, UK Field Segment Manager for water, explained: “One of the most obvious new features of the Type 8652 valve island is the integrated, back-lit LCD screen that displays pilot valve status, switching status of the process valve, a switching cycle counter as well as a diagnostic report. This simplifies commissioning and operational maintenance including fault diagnosis by providing instant status information for remote components and connections.

“Another feature that really stands out is the ‘hot-swap’ facility that allows control sections in the valve island to be replaced during normal operation. This means production can continue uninterrupted, even if a maintenance issue arises.” 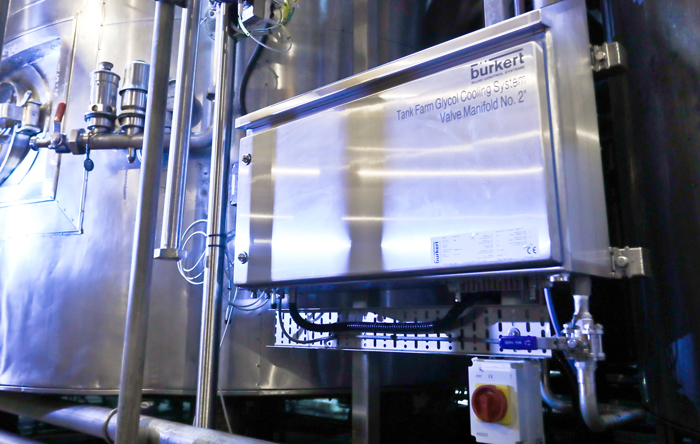 Simplified installation
Multiple Type 8652 units could have been daisy-chained together using one gateway to connect directly to the Rockwell PLC. However, in this case, it was a personal preference to install three, hard-wired connections to the valve islands; even with this option, there was still a considerable saving in the amount of wiring that needed to be installed for this project, compared to the original concept using electrical solenoid valves.

Interfacing with the PLC was a very simple process, the EDS file is available from Burkert’s website and the commissioning software is provided free-of-charge.

Khalid Aziz, Project Manager, at Marstons, concluded: “The technical assistance we have received from Burkert has had a very significant impact on this project. The increased functionality means that we can reduce the amount of cooling and have greater control over the whole process. We have also made some very significant savings in terms of installation time and overall plant running costs.”

Once this project was installed, commissioned and fully operational, Marstons continued with a further part of the expansion plan that required another valve island and 20 more Type 2000 valves, all of which were ordered from Burkert. These were installed as part of the project to provide new chilled storage tanks and offered the same simplicity of installation and connectivity.

For those looking to update existing systems or introduce new control technology, the Bürkert solution