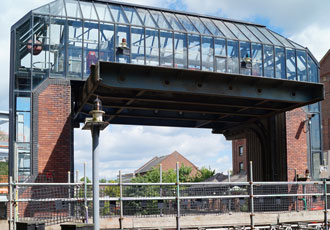 Structural steelwork is being provided by ECS Engineering to create a new pump hall and control room above the existing facilities at the Foss Barrier flood defence scheme in the centre of York. The work is part of a larger £17m project designed to improve the city’s flood defences.

The barrier is located at the confluence of the Rivers Ouse and Foss in the heart of the ancient city, not far from York Castle, the Yorvick Museum and other important buildings. It was built in 1988 and is designed to prevent floodwater from the Foss from backing up when it meets surge water in the Ouse. With the barrier closed, giant pumps transfer water from the Foss into the Ouse where it can run freely down the normal course of the river.

The barrier weighs 16.5 tonnes and is operated as a turnover lift gate. It is normally parked horizontally above the river, so that boats can pass underneath it, also allowing maintenance to be easily performed. It can be lowered into position in four minutes by powerful electric motors and a bank of eight pumps switch on to transfer water into the River Ouse through a side culvert. The original pumps could handle up to 30 tonnes of water per second, but the new scheme will see this upgraded to 40 tonnes per second.

ECS is extending the building upwards so that important control systems can be positioned at a height well above water levels. The project to upgrade this flood defence structure will improve the pumping capacity of the system and also make it more resilient during a flooding event.

ECS’s Project Manager, Andy Swindells commented: “Phase 1 of the works will see us erect 100 tonnes of steel above the existing building. The pumps will be installed and then, in September, Phase 2 will involve another 30 tonnes of steel work for the control room and other accommodation.”