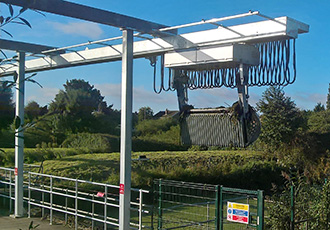 As part of a total renovation of Keadby Pumping Station, ECS Engineering Services has replaced and uprated a large span automatic weed screen cleaner at the site to increase flood resilience for the Environment Agency.

ECS installed a Landustrie system which, due to the size of the screen, was designed as a bespoke solution for the site. Furthermore, additional safety features have been added to the installation by ECS, improving the working conditions for site operators.

Weed screens serve to remove the build-up of debris collected from water flow by grates, which prevent large floating objects entering potentially sensitive areas or damaging pumping equipment. However, as the build-up increases, it is imperative to have a reliable cleaning system to remove debris and ensure smooth water flow.

Operators at Keadby had been encountering control issues with the existing system, which in some cases resulted in the weed screen requiring operator intervention to avoid faults. In an effort to improve reliability, the Environment Agency enlisted the help of its framework contractor, ECS.

“The weed screen at Keadby covers three separate culverts which filter into a single bay and then on to the River Trent,” Andy Nicholson, ECS Project Manager explained. “Two separate heads clean the screens, and then dispose of the waste into four dump sites for removal. Without a doubt, it is one of the largest weed screens we have installed for a customer, so it required some instrumentation modifications to ensure it could operate with complete reliability.”

ECS selected a Landustrie system with a corresponding control panel to begin with, but then added a second cleaning head to create a combined system. The standard controls therefore required adaption to allow the system to operate effectively. ECS conducted bespoke programming to manage the two separate heads, which were coupled with ECS modified PLCs.

Both heads were required to act as redundancy to each other in the case of failure, ensuring that material build up cannot reach a point where water flow is affected. To complement the custom control system, LED lighting was also added to the control areas to aid operators.

“Due to the span of the weed screen, each head was mounted to a twin speed trolley. In operation, the heads accelerate along the length of the track, which allows for a speedier removal of waste to the dump sites. With this increased system efficiency, build-up of material is kept to an absolute minimum,” Nicholson commented.

Another key concern for the project was to increase safety around the installation. To this end, ECS installed interlocks to ensure personnel cannot walk under the weed screen during operation. In addition, maintenance areas were fenced off and interlocked, providing improved protection.

“This installation required a tailor-made approach, which as a turnkey electro-mechanical solutions provider, we could deliver.” Nicholson concluded. “Our integrated, in-house design, manufacturing and installation teams allow us to deliver these kinds of bespoke solutions, improving flood resilience to the requirements of individual installations. With the weed screen fully calibrated, the area can now benefit from this increase in water control security.”