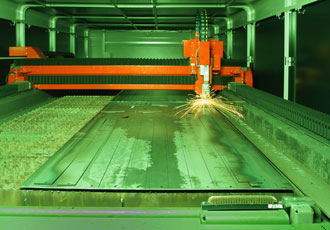 At the Bolton factory of trailer manufacturer, Indespension, sheet metal cutting productivity has doubled following the replacement of a CO2 laser-powered machine with a fibre laser profiling centre costing nearly £800,000. Manufactured by Bystronic in Switzerland, it was delivered in December 2016 and, following training of Indespension’s shop floor staff, entered full production during the second week of January.

The ByStar Fiber 6520 has a 4kW fibre laser and a 6.5x2m capacity bed, making it the largest fibre machine to date delivered by this supplier into the UK market. Only around a dozen machines of this size have been sold worldwide.

Steve Sadler, Indespension’s Purchasing Director commented: “We cut mainly 43A and pre-galv mild steel, plus some aluminium, from 1-12mm thick.

“Up to 3mm, the fibre laser cuts three times faster than CO2. It flies through 1mm steel, producing 10 holes per second.

“The advantage tails off as the thickness increases, but overall the ByStar is twice as fast across all the gauges we process.

“At a stroke, it has eliminated the bottleneck in our factory that was being caused by the CO2 machine not being able to keep up with our ever increasing laser cutting workload.”

The fibre laser was purchased in part-exchange for a 6x2.5m capacity CO2 model supplied by Bystronic to Indespension in 2009. Mr Sadler confirmed that a good price was realised for the old machine, despite it having worked up to 20 hours a day, highlighting value retention as an advantage of buying equipment from this Swiss manufacturer.

At the outset, the main reason for investing in laser cutting was to achieve a greater degree of in-house control over trailer production and save the expense of putting work out to sheet metal subcontractors. Another important consideration was to streamline the prototyping and design process and bring new products to market faster.

Mr Sadler continued: “Prior to 2009, during product development we had to buy in one, two or three sets of prototype sheet metal parts.

“Subcontractors were not keen on producing such small quantities, the price tended to be high and it took them four to six weeks to deliver the prototypes.

“If we needed to make a design change and go back to the subcontractor for further prototypes - it could be something as simple as a new set of mudguards - that could add another month or so.

He pointed out that, for the above reasons, a decade ago few trailers incorporated laser-cut features whereas today they are used extensively. Indeed, products are designed around the considerable capabilities of modern laser cutting machines. One advantage is that machining is so accurate that components fit together precisely and quickly during assembly, without the need for time-consuming fitting-up.

The other benefit is that machining is so fast, especially with the fibre laser, that it is a cost-effective way of taking weight out of components by incorporating numerous holes and slots. It would be too labour-intensive and therefore uneconomical to do manually.

The laser cutting cell in Bolton operates day and night shifts plus lights-out during the summer months, totalling 18-20 hours per day, five days a week. For the remainder of the year it runs a day shift and lights-out for 10-12 hours a day.

Indespension decided not to install Bystronic’s ByTrans automation equipment with either the original or the latest laser cutting machine, as the manufacturer processes a wide variety of sheet sizes, making automated loading problematical. The range of component sizes is also large, ranging from over 5.8m down to a few centimetres across. Operator attendance is therefore necessary to manage the diversity, so a manual, suction-pad lifting system is used for sheet handling.

This presents the company with a problem, however, if a production run involves a nest of only a few simple parts and they are cut from a thin-gauge sheet. The cutting cycle is so quick in the fibre laser machine that the operator does not have time to finish shaking parts from the previous skeleton before the following machined sheet is ready, or to load the next blank onto the shuttle table.

The company is therefore considering including micro tags into some sheet metal cutting programmes so that profiled parts remain attached to the skeleton, allowing the entire processed sheet to be transferred to an off-line station where another member of staff can help remove the components.

Of the laser-cut sheet metal parts that go into Indespension’s trailers, 80% require folding. Accordingly, when the first Bystronic laser machine was installed, a tandem press brake from the same supplier was delivered as well. It comprised an Xpert 200 and an Xpert 100 linked to enable bending of components up to 6.5m long. Two years later, a stand-alone Xpert 100 of 2.5m capacity was added to cope with increased throughput of smaller components.

There are productivity benefits from sourcing the laser cutting machine and press brakes from the same supplier in that all use the same Bysoft 7 software. When a new component is designed in Indespension’s SolidWorks CAD system and exported to the Bystronic control software, which itself contains powerful 3D CADCAM functionality, the model generates a program for laser cutting and a sequence for bending the component, including backgauge position and tool plan, thereby minimising delay and downtime.

The same software, which has full simulation capabilities, is responsible for nesting the maximum number of parts from a sheet, creating cutting plans and providing an overview of the manufacturing process including immediate access to production and machine data.

Mr Sadler concluded: “We are committed to leading the market in terms of innovation, quality and environmental credentials.

“The acquisition of the Bystronic fibre laser helps us to deliver on these aims as well as providing a much needed increase in production capacity.

“It also marks our commitment to UK manufacturing, which is an important part of our company ethos.”