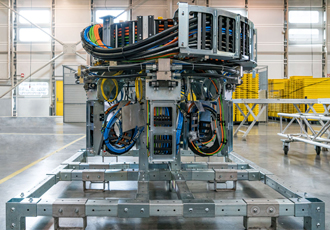 After only two years of development time, DMG MORI ushers in a new era of automatic turning machines with multiple spindles. The current MULTISPRINT series represents a technological revolution in automatic turning. The efficient turning machine itself and the fast, precise and diverse production processes that are enabled, make the MULTISPRINT into a machine with almost unlimited possibilities. Outstanding performance and quality developed and manufactured in Italy, with support and professional back-up from Germany: igus offers a special energy supply solution for both rotational and linear motion.

The "readychain" harnessed energy supply system from igus and the spindle drum were first brought together in April 2017, when many processes and manual procedures were not yet routine and demanded maximum attention from the people involved. Does the 750kg and almost two-metre wide energy chain system from igus fit into the housing of the machine? The fact that everything is put together in a way that is an absolute innovation in production technology for DMG MORI subsidiary, GILDEMEISTER Italiana. Finally, the motor is lifted into the housing with the help of the two lifting cranes. The readychain with its 8 energy chains, 64 electric cables and 73 hoses is then installed. The construction has a 1.8m high body for rotation. The six linear energy chains for driving the spindles protrude from this body like arms. In the chains, there are chainflex cables that are designed for motion and are fitted with appropriate industrial connectors. These are now connected to the electromechanical components on the turning machine. The process takes approximately two hours. Then, it is done: the readychain has been connected to the spindle drum. It is the highpoint of the collaborative undertaking.

The engineers and technicians continued working for a further three months until midsummer 2017 to assemble the machine completely, test it and send it on its travels: the destination was the world's largest machine-tool trade fair, EMO in Hannover. Here, the MULTISPRINT was presented as a revolution in mechanical engineering. After all, it is the first machine to combine a multi-spindle automatic lathe with SWISSTYPE technology. And all this with a Y-axis on each spindle position. And all this with a Y axis at each spindle position.

Maximum flexibility due to new technology
Due to globalisation and market dynamics, customer requirements for modern turning machines have changed and now demand the following: shortened processing and tooling times, reduced amount of effort needed for process development and integration and, at the same time, an ability to handle the increasing degree of complexity. The new MULTISPRINT from DMG MORI meets all these challenging requirements. Nozzles for fluid power equipment, implants for dentistry and shafts for motor vehicle manufacturing are just three examples of complex components that can be made on high-tech machines. The result is a manufacturing solution for scalable requirements from initial series production to the high-volume production of complex workpieces.

Due to this machine's performance, DMG MORI is setting new standards in terms of productivity and efficiency. The combination of three types of machine technology enables the customer to engage in completely new forms of production. The customer enjoys maximum flexibility for the mass production of components with a diameter of up to 50mm.

Heavy drum turns with extreme precision and maximum speed
The heart of the machine is the spindle drum with six spindles for simultaneous machining of several workpieces. The main spindles in the drum have a travel of up to 180mm. The drum moves the workpieces to the tools quickly and very precisely. It only takes 0.65 seconds for one of the six spindles to travel to the next position. For spindles to return to the starting position after machining has been completed in the six stations, the drum must turn 300 degrees in reverse. For this, the unit, which weighs over three metric tons, only needs one second. The rods are pushed out of the loader through the drum to get into position for machining. How did DMG MORI manage to implement the different types of movement with this speed and precision?

igus readychain enables a reliable energy supply concept
In summer of 2016, DMG MORI invited tenders for the catalogue of requirements and the Cologne plastics specialist igus was awarded the contract. Mirko Passerini, Technical Director at DMG MORI's Italian location GILDEMEISTER Italiana S.p.A. and responsible for the development and production of the MULTISPRINT, explains the decision in favour of igus: "We have a lot of confidence in the many years of experience that igus has in the development of custom-made energy supply systems. As well as in the company's extensive, high-quality testing facilities." The first meeting of the experts from the two companies took place in January 2017. "The first meetings were exciting", says Passerini. "Two igus engineers visited us in Italy for a week. Progress and plans were compared and harmonised several times a day. Ideas for solutions were developed and sometimes rejected". Plans for the sheet-metal design were made and suitable cables and hoses for supplying the drum with energy, data and fluid were chosen. "The readychain solution from igus was the breakthrough for us", says Passerini, with conviction. 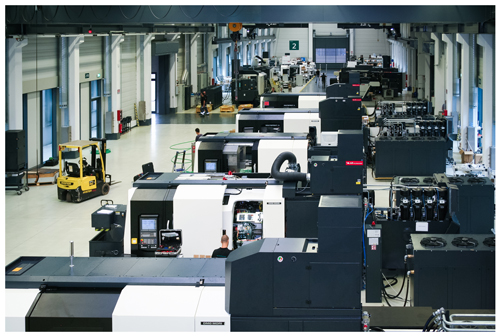 High requirements regarding precision and speed
The meetings of the experts resulted in a unique energy supply system that rotates with the drum and enables the linear movements of the spindle drums. Consisting of a metal frame, cables, hoses and chains, the system is located in the middle of the machine and is suspended from the drum, which rotates permanently at high speed. "The statics of the metal construction were a new challenge," says Volker Beißel. He is one of the central contact persons from the industry management business unit for machine tools at igus and supervised development of the readychain from the very beginning. "After every stage of development, we re-calculated the statics in order to be sure that the metal construction would remain stable and not become fatigued." The goal of igus is to ensure that the energy supply system has a service life of at least five years.

igus uses a rotary energy supply system that rotates along with the drum. These are custom-made systems for circular movements with energy chains, which are used in machine tools and construction machines. The standard rotary modules consist of two circular guide elements. One part of the guide trough is attached to the stationary part of the system and the other part to the rotating part. The reverse bend radius enables movement of the energy chains in two directions. Rotation angle up to 540 degrees on one plane can be made possible here.

"We solve the problem with plastic"
The drum in the MULTISPRINT rotates in a range of 300 degrees and consists of two rotation systems. In the outer system there are the hoses, as they need a somewhat larger bend radius, which is 160mm in this case. In the inner circle, twenty-four cables are guided – twelve encoder cables and twelve servo cables. For each of the six linear chains, there are therefore two encoder cables and two servo cables. One of the servo cables supplies the energy for the linear movements of the main spindles in the drum and one drives the spindle motor. They can move at a speed of 0.66m/s and with a maximum acceleration of 10m/s2. The six energy chain systems can be plugged in individually due to distribution boards and are easy to maintain or modify. This was also one of the main requirements of the mechanical engineering company DMG MORI Italiana. Maintenance and service are of prime importance at DMG MORI. In addition, the chains and cables of the readychain must manage with a relatively small installation space. It is important to ensure that the working space for the mechanics behind the drum is as large as possible. The system developed by igus completely meets these requirements.

More than 800,000 (4,8 Mio parts) test cycles without any problems under real conditions
The engineers from igus had three months to develop the system. During development, a lot of value was placed on the modularity of the individual components. The linear chain systems can be plugged in and the sheet-metal parts designed by igus, for attachment to the machine, are made of several parts. This facilitates handling of the readychain on the customer's premises and makes harnessing in the igus factory easier. The igus specialists need approx. 2.5 days to complete final assembly of the chains with the harnessed cables and hoses. For fast production, it is helpful that 95 percent of the readychain consists of parts directly made or procured by igus. Assembly is also supported by the readychain rack, a method typical of igus - a metal frame with four different functions. It is an assembly tool for the connection of components at igus and makes the entire construction stable. The rack is exactly two times two metres in size and fits onto the load bed of a small lorry. Transportation to the customer is made easier thanks to the rack. On the customer's premises, the rack enables easy plug-and-play connection of the fully harnessed energy chain to the machine.

"Before delivery, the entire system was intensively tested for weeks on end", says Lukas Czaja, Head of Industry Management Machine tools at igus. At its headquarters in Cologne, igus operates the industry's largest test laboratory, which is 3,800 square metres in size. A specially developed test stand simulates the movements of the multi-spindle automatic turning machine. In the realistic environment used, the readychain has already completed more than 800,000 cycles without any problems. 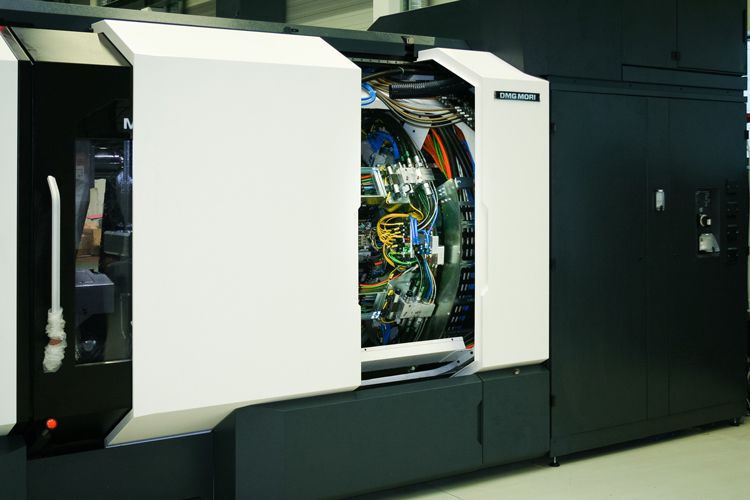 New developments at DMG MORI and igus prove to be worthwhile
Today, the Multisprint combines the productivity of a production turning machine with the precision of an automatic turning machine and the complexity of a universal turning machine. The MULTISPRINT is therefore able to make complicated turned and milled parts in the areas of bar machining and chuck machining - without a lot of effort being needed to retool the system. In June 2018, the Italian factory delivered the first MULTISPRINT. Today, dozens of Multisprints are in use in Germany, Italy, the US, Spain and other countries. "The customers are thrilled and understand the concept of the new machine immediately," explains Passerini enthusiastically, "and they especially like the ease of maintenance that the igus energy supply system enables."