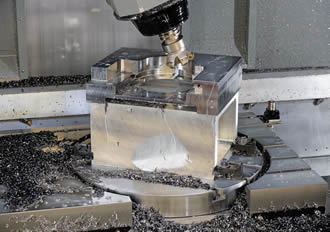 Increasing its stock of Hurco machining centres to seven, toolmaking and subcontract CNC machining manufacturer DSM-NE, Newton Aycliffe is including a large 3-axis model and an even bigger 5-axis machine, the company’s first, which was installed in October last year (2015).

One job in particular has benefited enormously from its arrival. A tool steel (P20) die nest, part of a progression moulding machine, initially took 75 hours to machine in six separate set-ups on a Hurco three-axis machining centre. According to DSM-NE’s technical director, Andrew Wilson, the cycle would have reduced to 50 hours after process optimisation.

However, the same job is completed on the Hurco VMX60SRTi 5-axis machine in two operations taking five hours and eight hours respectively. This is around one-quarter of the best possible time on a 3-axis machine and has turned what was originally a loss-making contract into profit.

Wilson explained: “We looked first at fitting a 2-axis compound rotary table to a 3-axis machine because nobody here had experience of operating a full 5-axis machining centre.

“However, we saw the VMX60SRTi demonstrated at a Hurco open house in High Wycombe last year and were impressed at how easy it is to programme.

“We were familiar with the 2D programming capability of Hurco’s WinMAX conversational CNC system, but it can also create quite complex 3D / 5-axis routines involving two positional axes, which takes only a few days to master.”

For fully interpolative 5-axis cycles, DSM-NE employs two seats of Delcam’s Powermill, which are also used for producing more complex three-axis routines. However, half of all programs at Newton Aycliffe are generated on the shop floor at the Hurco WinMAX controls.

They allow intuitive, menu-driven data input via a touch screen, with a second screen on the 5-axis machine for simultaneously displaying a graphic of the part as it is built up. All controls accept DXF drawing files directly from the subcontractor’s CAD system, lightening the load on the CAM department. WinMAX can easily take over programming of mould plates, for example. Wilson pointed out that with most other control systems, this would not be possible.

Technical manager Steven Guz highlighted another benefit of the WinMAX control, namely its Ultimotion software algorithm that optimises look-ahead throughout the cycle to speed and smooth the milling process, even around sharp corners.

Guz said: “Identical programmes on our older Hurco machining centres without Ultimotion take half as long again to finish and the absence of chatter considerably improves the surface finish of machined components.”

The subcontract milling, turning and wire erosion side of the business has grown steadily since 2011 to account for one-third of turnover. It is largely down to the success of one of the subcontractor’s OEM customers specialising in LED lighting, for which DSM-NE is sole supplier of machined aluminium housings and heat sinks. Other contract machining on site involves producing ancillary parts for customers’ moulding machines. Offshore work normally accounts for a reasonable proportion of turnover, although that sector is subdued at present.

The broad base of the firm’s current activities stems from the outflow of toolmaking mainly to the Far East during the last decade. It is true that significant income was retained by correcting poorly made imported tools, work that sometimes cost half as much as the originals, but it was clear that this could not be relied upon long-term.

Shortly after the company moved into its current premises on the Aycliffe Business Park 20 years ago, the first Hurco vertical machining centre (VMC) was purchased, a VM1, which replaced a manual-tool-change milling machine from the same manufacturer. A larger BMC 4020 VMC followed quickly.

The latter machine ran reliably for 22 years and was eventually replaced by a VM2 during 2008. In the same year, a Hurco TM8 turning machine was installed, the first CNC lathe on site, to streamline the manufacture of parts for compression moulds and also to open up general subcontract machining opportunities. Subsequently, in the run-up to purchasing the two big VMX machines, DSM-NE added three Hurco VM20s in as many years to cope with increasing volumes of LED lighting components. 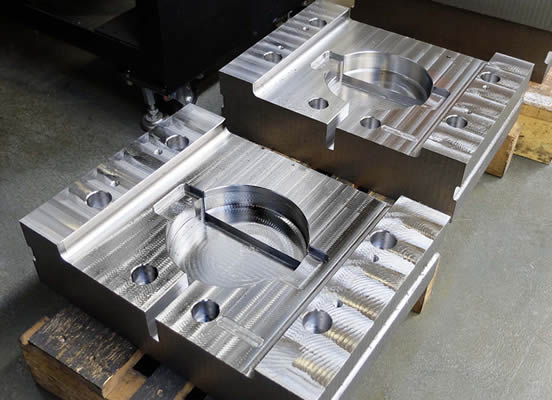 Mr Wilson commented: “We continue to buy Hurco machines not only because of the commonality of programming and operation, but also because they are reliable and competitively priced. The latest 5-axis machine was half the price of a similar model from another supplier we benchmarked.”

Looking to the future, he sees growth opportunities in full 5-axis machining. The VMX60SRTi has already taken over three-axis work from other vertical machining centres, which it completes more economically using 3+1 and 3+2-axis cycles in fewer set-ups.

Contracts are being sought that can exploit its simultaneous 4-axis and 5-axis machining capabilities, which is enhanced by the B-axis spindle head and rotary C-axis configuration, the latter being flush with the machine table. The arrangement offers a bigger machining envelope than an equivalent trunnion-type, 5-axis model, especially for 3- and 4-axis work, and was the reason that this style of machine was purchased.