The future of driving digital transformation 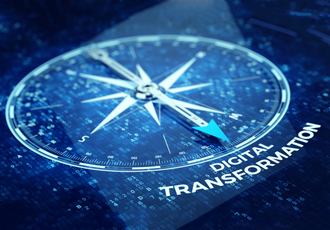 At the recent Unbound festival there was a panel discussion on digital transformation encompassing the digitalisation of business processes, assets and products. As with the rapid advancement of artificial intelligence, high UX standards and increasing security threats, businesses need to be agile and embrace digital transformation. Moderator Kenneth Cukier, Senior Editor at The Economist started by asking the panel experts: “When we think about digital transformation do we think failure or success?”

Every single person on the panel answered failure except Ann Higgins, Chief Consulting Officer at Ogilvy, who explained: “When it comes to digital transformation the projects out there are successes, but the problem is now peoples’ expectations are too high, so it hasn’t made the whole idea a failure, just made it more difficult.”

It is important for an organisation to identify where it is before the transformation process and what they want the end goal to be. A lot of companies are now just ‘transforming’ because it’s the ‘in thing to do’ and they feel they have to.

Serge Taborin, Chief Digital Officer at Capita commented: “What does transformation mean? A lot of corporates fall into a trap of not laying out their end goals and fully understanding true transformation and how to get there. Transformation is a cultural way of thinking about your business future.”

Danny Wootton, Head of Innovation at the ISS Ministry of Defence added to this and said: “When you look at what companies set out to do, and what they have done – they haven’t really transformed. Yes, changed slightly but not transformed.”

The panel agreed that the phrase digitally transformed is being thrown around far too much, especially when you look at what companies are really changing.

Cukier proceeded to then ask: “So what is digital transformation really about?”

Namrata Sarmah, Senior Director Product at Viacom expressed: “People changing is the biggest problem. It’s about change in people - I would perceive digital differently to my young son. If you don’t implement and introduce digital transformation in the right way, then employees and workers can end up hating and resenting it.”

Cukier himself then added: “What we are saying is it’s about a cultural change, you can’t just do it overnight it needs to be planned and you need to all want the same thing, and have the same end goal.”

Wootton then added: “Ultimately you have to get your whole organisation on board - find the areas that will have the biggest impact on your organisation and accelerate these, and you will get there.”

James Gibson, Head of Product at Revolut for Business agreed but added: “It’s also about having the right person in charge. This is so important as they can inspire and influence the rest of the team in such a powerful way. Some people have digital and transformation, and the determination built into them.”

Speaking from experience Gibson expressed what an incredible leader Nikolay Stronsky, Founder and CEO of Revolut, had been for the business as he has taken the new electronic banking platform to the next level with the amount of success it has seen in such a short space of time. Gibson commented: “He knew what he wanted to achieve so he set out and with the right people he did it.”

Sarmah concluded by saying: “Digital transformation can work, and people do want it to work. Everyone loves a success story, and people learn from example. There has been a lot of negative press around the word transformation - people think it means big change and loss of jobs. So it’s about showing people it doesn’t necessarily mean loss of jobs and that it can be a good change.

It’s about soft small changes to point people in the right direction. You can’t just jump straight in at the deep end.”