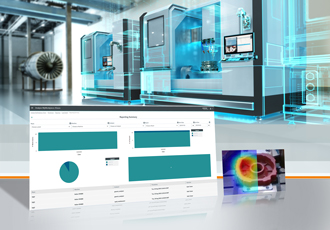 Siemens has extended its Industrial Edge offerings for the machine-oriented Sinumerik Edge to include more new applications. With the new software, the company is helping machine tool users to improve workpiece and process quality, increase machine availability, and further optimise machine processes. With Edge Computing, large volumes of data can be processed locally on the machine tool.

This also reduces storage and transmission costs for users, as large data volumes can be preprocessed and only the relevant data then transferred to a cloud or IT infrastructure.

Increased machine productivity using artificial intelligence with Optimise MyMachining /Magazine
In the field of performance enhancement, Siemens is also presenting a new Edge application at this year's EMO. Part of the performance increase results from an optimal arrangement of tools in the magazine. The optimisation algorithm of Optimise MyMachining /Magazine is based on artificial intelligence and runs on Sinumerik Edge. It calculates the tool arrangement in order to minimise manufacturing time. In the field of improved machine productivity, the new application adds to the Optimise MyMachining /Trochoidal Edge application presented at last year's AMB.