Pan and tilt cameras have better than ever tracking abilities 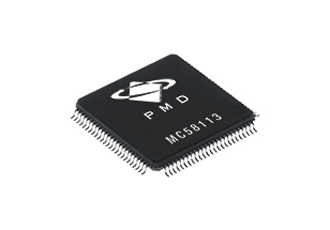 CCTV pan and tilt drives are required to be faster, quieter, smaller, smoother and even more accurate than ever; however security operators also need them to be easy to set up and run. Additionally with all this, they insist that costs continue to come down, so how do you achieve all these elements? Gerard Bush of INMOCO explores how today’s high performance off-the-shelf motion products can quickly bring sophisticated systems to market and reduce the price point.

There is always something slightly chilling about watching a CCTV camera mounted high on the outside of a building track round to pick up a person then follow them as they move across the field of vision. It is almost as if eerie background music is playing and every shadow harbours a potential threat. You half expect to hear a piercing scream and… or maybe it is just that I have just been watching too many Hitchcock films.

In truth of course security cameras are almost always a force for good and are rarely controlled by an evil genius with plans to take over the world.

In technical terms a pan and tilt mechanism is a relatively simple two-axis motion platform: both axes are rotational, one horizontal (panning), the other vertical (tilting). It is usual to integrate these motions with a third axis which is used to focus the camera lens onto objects of interest (zooming), which is why these systems are also often called ‘Pan, Tilt, Zoom’ systems.

A generation ago pan and tilt mechanisms were built and commissioned individually, using a bespoke design for each application. Today, they can be assembled from relatively low cost components, sub-systems and multifunction controllers and are generally far more compact than earlier designs.

However they remain high tech solutions, due to advances in the servomotors and amplifiers that control them and also to new features, such as the ability to integrate via Ethernet with other cameras and security equipment on site and to communicate with control stations that may be many miles away.

Typical pan and tilt drives are based on low inertia slotless brushless DC or stepper motors and a controller that can support point to point movements for general surveillance, manual tracking using joystick control and an automatic tracking function that will follow suspicious movements while also adjusting the camera’s focus to keep the subject in clear view.

One of the big issues related to CCTV drives is the need for quiet operation. For this reason the American company PMD, represented by INMOCO in the UK, developed a special current loop for its MC58113 Integrated Circuit for multi-motor control (meaning it can operated Brushless, Step and DC Brushed motors by setting a command in software) that is ultra-quiet in operation, making it particularly suitable for use in security cameras.

The interface between PMD’s motion control chips and Atlas amplifiers is digital, so when there is environmental interference (like stormy weather) that distorts the signal, the amplifiers shut down. Most amplifiers continue to output the current corresponding to the distorted input signal, which can cause operational errors or even system damage. For CCTV systems installed outdoors, this is particularly advantageous.

To complete the system, servo amplifiers and encoders or other feedback sensors are also required. Naturally, a communications port is needed if the camera is to be integrated into a site-wide security system. It is notable that today’s CCTV requirements usually include significant space constraints. Designs based on PMD technology offer an unprecedented level of sophisticated motor control in a very small footprint.

Motion control solution
In applications such as this INMOCO often recommends a set of 3 Magellan MC58113 ICs from PMD, as they can provide integrated pan, tilt, and focus control, including multi-dimensional contouring motion profiles using an optional firmware module User Defined Profile Mode. PMD provide schematic and layout examples as well as a complete C library with motion related subroutine source code for integration into a customers’ PC based or embedded microprocessor code.

There are several other PMD options for control, like the Atlas amplifiers which provide on-board digital current loop and non-volatile memory functions for motion trace analysis and high PWM frequencies ideally suited for ultra-quiet operation of small motors. This packaged solution is low cost, compact, reliable, and easy to install. It also has sophisticated amplifier power management. Further, in most pan, tilt, zoom systems the motor power is small, which makes Atlas a great choice.

Safety limits for joystick operation are implemented via limit switch inputs connected to the motion control board. Various interface signals can be directly connected to other platform subsystems for safety commands and data processing synchronisation. 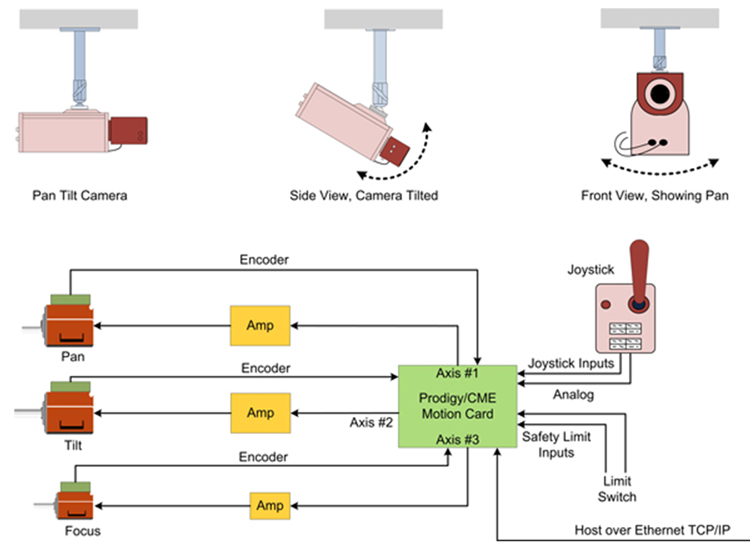 Motion optimisation can be performed using PMD’s Pro-Motion software development and motion verification system. This records and displays four motion parameters per axis (selected from an available list many more parameters) at the programmed servo sample speed of 20kHz.

Significantly, PMD's motion architecture allows users to develop systems using a range of different products so that different feature sets, as appropriate to each project, can be realised based on a single software/hardware platform. This can lead to saving substantial development costs and significantly accelerating time to market.

PMD's Developer's Kit provides system emulation that enables software development concurrent with hardware development; while its C-Motion Software is an easy-to-use motion programming language with an extensive source library that contains all the code required for communicating with PMD motion processors.

CCTV pan and tilt drives have moved on from the more rudimentary designs of 10-20 years ago, which, coupled with better multi-camera controls and improved optics and vision technologies, has redefined the state of the art for the security industry. With control and drive capabilities still advancing, it is unlikely that security technology has yet reached its zenith – so future burglars will have to either up their game or find an honest profession.