One lightweight motor drive takes one big leap into space 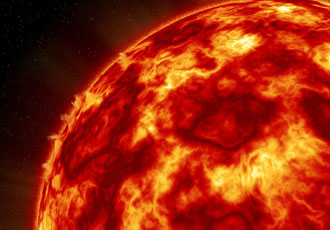 It takes a year for the Earth to revolve around the Sun, and without that Sun there would be no Earth or us. The Sun plays a vital role in our existence and yet we know so little about it, until now. In 2018 ESA is sending a Solar Orbiter into space which will be equipped with a thick heat shield.

Taking a more cautious approach, the Solar Orbiter will step by step change its trajectory and swing by Earth and Venus to reduce its distance from the Sun to only 45 million kilometres. Sounds pretty far, yet no other human-made object has ever been that close, and to come back to Earth would be thrice as far.

The Sun will not be a pleasant place for the Solar Orbiter: Facing the Sun will see temperatures rise up to 520°C under the ceaseless pounding by solar radiation. All other sides are surrounded by the eternal cold of outer space. This combination makes for an incredibly challenging environment.

The secret of solar eruptions
Being a joint project, the Solar Orbiter is controlled by the European Space Agency (ESA) and the US agency NASA. This mission will go down as an important milestone in the exploration of the Sun, even though the star is responsible for the development of the planets in our solar system, and even though it influences the weather as well as life in general, we know far too little about it, and ESA are hoping this will change our knowledge and relationship with the Sun for the foreseeable future.

For example, do you know what causes the solar winds? Or solar eruptions? What forces are behind the formation of the heliosphere, the cloud of charged particles that extends past the outer reaches of our solar system? 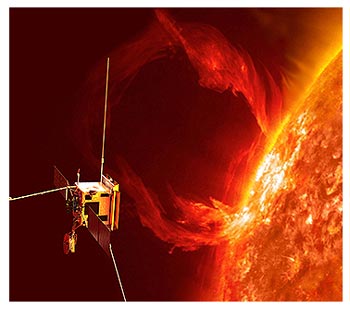 Scientists believe these are questions we should be able to answer, and although it is going to be a while before we have all the answers in the long-term it will be worth it; slow and steady wins the race.

The plan is for an American rocket to take the probe into space in 2018, and then it will travel for three years until it can begin its work.

The Solar Orbiter is going to provide a new perspective of the Sun, its surface, and the polar caps, and to do so in a variety of conditions, it is equipped with around a dozen cameras and measuring instruments.

Some of these systems and subsystems are being developed and built in Lausanne, Switzerland, where the company Almatech is involved.

In the development of STIX, an X-ray telescope for the observation of solar eruptions Almatech played a significant role. It is expected to yield new insights into the acceleration of electrons and their projection into the depths of outer space.

Sunglasses for instruments
We have sunglasses not only because they look good, but also we should not look directly into the sun, and the same applies for the measuring instruments, they need protection. The intensity of the radiation on board the Solar Orbiter given off by the sun is 13 times higher than back on Earth.

This means of protection is an advanced heat shield which will be directed at the Sun at all times. To allow access for measurements a few holes are able to be opened, however, the instruments need to be protected too. 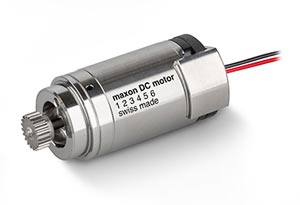 When looking at the STIX, protection is provided by permanent beryllium protective filters and the use of an aluminium grid during solar eruptions. The grid is able to withstand being placed in front of the 32 X-ray detectors by means of two maxon RE 13 motors.

The brushed DC drives are wired in parallel, enabling them to be used together or individually, this ensures a service life of ten years – the planned duration of the mission.

At Almatech, four engineers are continuously working on the detector system, which is called STIX-DEM. Senior Project Manager Fabrice Rottmeier explained: “It’s a challenge to develop a device that has never been built before and to test it to prove that it is going to function reliably. At the same time, it’s a great experience and very motivating to be part of a scientific research program that investigates questions about the origin of the universe and the origin of life.”

Lightweight drives as an advantage
One huge and critical factor for all space projects is weight, and this is where maxon motors come in. Rottmeier continued: “With maxon drives we were able to build a shield that weighs less than 200g and survives vibrations, for example during the launch, without problems.”

The renowned reliability and high quality of maxon motors were another selection criterion. He added: “The support from their engineers is very flexible and all around great.”

Let’s take a look at a masterpiece of technology that everyone is familiar with, the International Space Station (ISS), the world’s highest research laboratory, which also has drive systems from maxon motor on board. 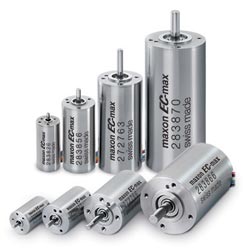 The International Space Station has been orbiting Earth for the past 15 years. It is being used as an international research station, operated jointly by the US American space agency NASA, the Russian space agency Roscosmos, the European Space Agency (ESA), as well as the space agencies of Canada (CSA) and Japan (JAXA).

Back in November 2000, the Space Station was commissioned, and since then a total of 216 astronauts have flown to the space station to expand it and to work on a variety of research projects.

With more than 900 experiments from 63 countries, having taken place since 2001 the ISS plays a pretty significant part in the Earth’s relationship with space. These include research on how plants orient themselves in zero gravity, why humans suffer muscle and bone loss in space and how the cells of the human immune system react to a weightless environment.

The team sent two research projects to the ISS on board the SpaceX Dragon capsule back in January 2015. The technical equipment, such as various laboratory devices, was and still is essential for the experiments on board the ISS, with robots being able to perform the tasks of astronauts or assist them also play a decisive role.

Special robot experiment
For example, there is one experimental robot named ‘REX-J’ (Robot Experiment on JEM), and he has been in action in Kibo, the Japanese module of the ISS, since 2012, and was developed by the JAXA space authority. 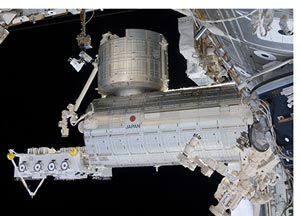 This experiment aims to develop a whole new generation of robots, including astrobots , which are capable of moving across the surface of the space station and inside it, to move loads or to perform inspections.

This robot is different due to its special locomotion system, which uses tether mechanisms to support the robot. With hooks, the tethers are attached to the existing hand rails that the astronauts use to secure themselves during extravehicular activity on the ISS.

The mobile robot is equipped with an extendable arm. At the end of the arm, there is a robot hand that is capable of attaching the tether cables to up to three different anchoring points. This allows the robot to move across a surface like a spider. The robot is operated by the remote control from ground, so that no support from the ISS crew is required.

Powerful drive systems for precision movements
Not forgetting one of the main components of the REX-J, he is equipped with several drive systems made by maxon motor – and so is the robot extendable arm.

With the wrist joint having two degrees of freedom, vertical and horizontal, this is made possible through the maxon motors. The wrist joint and extendable arm contain brushless EC max motors, planetary gearheads and encoders. There are the control electronics for the motors in the end of the arm. Additional maxon drive systems are also used in the rotary mechanism of the robot and in the cable spool (roll-up mechanism).  With a good track record, all the experiments with REX-J have been completed successfully. JAXA plan to now develop the robot system further, and aim to use these robots for a range of tasks on the space station in the future.

These tasks will include monitoring ISS devices and performing visual inspections of the space station, to detect damage to the outer hull. In the long-term future another ultimate goal for JAXA would be to build mobile astrobots that can operate large structures in space.

They’re not just taking over the planet, robots plan to take over the galaxy. 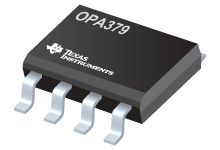 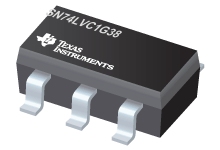 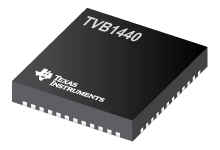