Is there a future for inverter drives in the water industry?

Home > Motors & Drives > Is there a future for inverter drives in the water industry?
9th February 2017
Source: Mitsubishi
Posted By : Anna Flockett 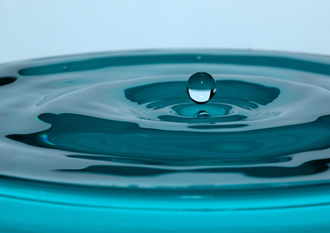 Climate change, rising energy costs, tightening legislation, population growth and increasing usage per head are all challenges that face the water industry. Helping to keep pace with these demands is the use of automated systems in order to make pumps and processes work more efficiently. However, what does the future hold for one of the most pivotal products in the automation mix, the inverter drive?

Matt Handley, Product Manager for Drive Systems, Mitsubishi Electric UK explains how inverter drive technology is evolving to help in an industry where equipment may be expected to run for 25 years and judging by current evidence, could be in operation for a century or more.

Recent generations have probably taken water for granted and the structure of the industry meant it was left to run often aging and inefficient distribution networks. Today that is no longer the case, as there is new investment and a public appreciation that water is both one of the most important commodities on Earth and a costly one to process, hence efficiency and improved management is the new goal for the industry.

Contrary to that change in opinion, urban populations are increasing around the world, so there is a mounting need to provide clean fresh drinking water and process more waste water. Water consumption per individual is also increasing throughout the developed and developing worlds. Additionally, climate scientists are predicting that weather patterns will become less stable over the coming decades, and this will adversely affect the reliability of our traditional water sources.

To take care of this scenario, while upholding the goals for improvement, leakage of water in transit from collection areas to the point of use has to be reduced and pumping has to become less energy hungry and costly to operate. Equally, new methods for the treatment of sewage that use less water need to be developed. One starting point to this is sewage waste being used to generate energy, and if this can be done relatively locally, then less input energy will be required.

Most countries are developing new legislation to encourage their water industries to adopt new strategies and new technologies to make their operations more efficient. 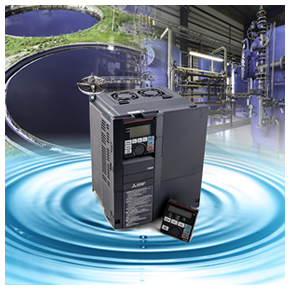 Not surprisingly, inverters or variable speed drives are seen as a key technology for helping the industry address these issues. Originally developed to bring more control to industrial processes, inverters can also reduce electric motor energy consumption significantly. Both of these characteristics are very attractive to the water industry.

One of the most important attributes water engineers look for when specifying equipment is long design life, and inverters are not exempt from this. Therefore a robust design and reliable components are essential. Additionally, water engineers will need their inverters to be adaptable, because they may want to redeploy them to a different duty in five, ten or even 15 years’ time.

Inverter controlled pumps can be used to match supply to demand throughout the distribution network, providing more water at peak times and trimming it back, say at night, when demand drops off. Reducing the pressure in the distribution network like this has a considerable effect on losses due to leakage. Similarly, processes like aeration, chemical infeed and sewage treatment can be more precisely controlled through the use of inverters on various pumps and motors.

For many years the water industry used valves to reduce flow at times of low demand. But this meant that the pump motors continued to work at full speed, which used a lot of energy. It is also notable that motors were often oversized for their basic duty so that they had a bit of extra power in reserve, but this did mean that they constantly drew more energy. The modern alternative is to add inverter control to the motors, which allows pump speeds to be reduced at times of low demand to save energy. The inverter can also be used to give the motor a temporary power boost when required.

An important advantage of inverters is that when they are running equipment at less than full speed, there is a consequent reduction in wear and tear. This can lead to reduced service and maintenance requirements, which in the case of remote and hard to access pumping stations can represent a significant cost saving in logistics alone.

Further, the ideal water industry inverter should be able to run automatic self-diagnostic checks and transmit the results wirelessly back to the technical department, so that engineers do not have to travel to site for routine work.

The electronic intelligence of an inverter can also be put to use for issues that are specific to the water industry, such as controlling water hammer and ‘deragging’. Water hammer is induced when there is a sudden load within the distribution network, such as may be caused by the closure of a valve, an impact from an external source, a sudden increase or decrease in demand or a pump suddenly coming on line. The shock load can reverberate repeatedly through the pipework, reflect off hard surfaces and even feed off itself. This can lead to temporary or permanent leakage and even catastrophic failure of pipes.

Therefore the water industry likes its inverters to be able to soft start pumps and other equipment and to be able to recognise the repeated pressure fluctuations of water hammer and to smooth them out. This not only reduces maintenance and repair demands but can also extend motor life by reducing stresses in the electrical system.

Deragging is the water industry term for unjamming the impeller of a pump, which is often caused by a build-up of rags or other fibrous debris in the pipework. The problem is almost inevitable, even though screens and filters are fitted throughout water plant facilities and the wider distribution network. Clearing a blocked pump can be very disruptive and very expensive because it may involve closing a part of the distribution network, craning out the affected pump and dismantling it.

Therefore the water industry has been keen to encourage inverter companies to develop self-deragging drives. Put simply, the inverter should be able to detect any increase in local pressure and trigger a self-clearing sequence that will consist of increasing power and/or cycling the pump back and forward to see if the blockage can be dislodged and dispersed. In fact such inverters can be programmed to fine tune this basic operation to best suit each individual situation. 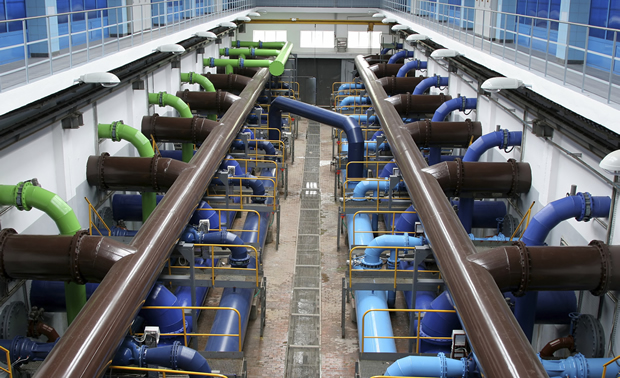 The sort of large inverters employed in the water industry used to have a reputation for causing harmonic disruption to the electrical mains supply and affecting the power quality. This could compromise any electrical equipment in the surrounding area, both within the water works and beyond to neighbouring properties. However the latest generation of drives has addressed this by incorporating active filter technology that typically reduces distortion down to less than 0.5% Total Harmonic Distortion of Current (THDi).

Engineers are often torn between specifying a product that has been designed specifically for the job in hand and one of a more standard design that should have a lower overall cost of ownership because it will be bought in larger volumes and used in a number of installations. For water engineers, the choice is between inverters designed specifically for pumps and those designed for general purpose duties on aerators, conveyors and other equipment commonly found in water works.

Fortunately some manufacturers have managed to resolve this issue by developing inverters that use standard hardware but which are given application specific characteristics and features in software. A pump rated inverter for instance will be ‘tuned’ to meet the torque control requirements of a pump. It will also be configurable for single and multi-pump installations and have pump related functions such as automatic level and pressure control, soft starting and deragging algorithms.

A couple of decades ago the water industry could have been described as a bit of a sleepy backwater of the engineering world. But today it is facing challenges of epic proportions, ones that could change the world completely.

Inverter drives are now one of the key technologies for ensuring success. The drive of the future then, to a certain extent, is here now, they can communicate wirelessly, an operator can visualise them within a system, monitor and control them securely via a mobile device, they will sort problems out on their own, work incredibly efficiently at different speeds and loads, reduce maintenance costs and burdens as well as being easier to set-up as they are self-calibrating.

Mitsubishi Electric has just launched the FR-F800 series of intelligent inverter drives for pump and fan applications, specifically designed to satisfy all these requirements for the water industry.