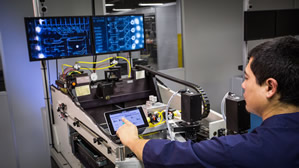 A range of solutions and products that will help companies easily and cost effectively move into the Smart Factory arena and exploit the Industrial Internet of Things is available at RS Components. The distributor offers users two primary approaches to exploit the capabilities of the IIoT, neither of which involves significant capital expenditure or complex redesigns of existing systems.

Users can either exploit the capabilities of contemporary PLC technologies or simply add the capability to tie existing legacy network infrastructures into modern communication systems.

According to Paolo Carnovale, Category Marketing Manager - Automation & Control at RS: "Industrial automation systems and IT infrastructures are complex and expensive assets. When new technologies become available, engineers cannot simply uproot them to start all over again. RS is introducing a series of devices to connect existing legacy systems to the Internet of Things. An installed sensor or PLC might have been designed to communicate through a serial port, and use Modbus as native protocol, but that doesn't mean that their data cannot be translated and made suitable for IoT systems."

RS has a number of options for replacement-PLC/controllers, including the Siemens SIMATIC S7-1200 + HMI KP300 Starter Kit, which offers a communication interface that fulfils the highest standards of industrial communication. Alaso available is the Magelis SCU HMI controller starter kit from Schneider Electric, a panel PC that offers Ethernet connectivity for seamless integration into wider networks.

Software solutions also exist in the form of groov from Opto 22, which is a web-based operator interface system that connects easily to almost everything and is available either a standalone hardware appliance or as a PC-based Server for Windows.

Intermediary devices can also be used to bring legacy systems into an Ethernet environment. One example is the ED-204 Ethernet Media Converter from Brainboxes, which can be used to link PLCs with PC-based data acquisition and analysis solutions.

Ethernet-capable sensors and devices, such as the AX8 from FLIR, are also becoming commonplace. With EtherNet/IP and Modbus TCP compliance, these devices can directly share analysis and alarm results with a bigger automated system.

Ethernet capability is not essential for the IoT, as proved by the PyroNFC Infrared Temperature sensor from Calex.

This sensor is fully configurable via a NFC-compatible smartphone, which can then act as the bridge to the wider network.