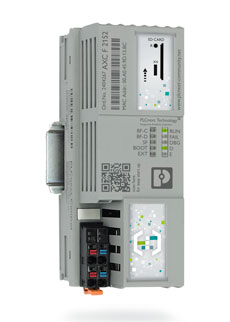 The first programmable logic controller (PLC) to be based upon Phoenix Contact’s PLCnext Technology open control platform has been introduced by RS Components. Aimed at distributed modular control applications in industrial automation and machine building research, the new PLCnext Control system combines the robustness and security of a classic PLC with the openness and flexibility of IIoT (industrial internet of things) smart devices.

Young engineers today tend to be proficient in high-level development environments, but often lack the PLC programming expertise of previous generations. The PLCnext platform is an enhancement to classical IEC 61131 compliant PLC programming that allows developers to program using a choice of high-level languages.

Open-source software and apps can be incorporated flexibly within the system. The real-time performance and data consistency associated with proprietary, device-specific PLC coding are maintained while the limitations are avoided.

Multiple developers can work independently using their preferred development tools, their contributions being captured seamlessly into a single project. The result is that applications can be developed significantly faster than previously.

PLCnext Control is based on an embedded Linux architecture, expanded to include real-time capability in its core.

Linux is stable, supports secure communications and, because it runs on many different hardware platforms, allows scaling and use of future processor architectures.

The PLCnext Engineer engineering software platform uses automation modules and object-oriented programming to provide a single optimised user interface for all engineering tasks, saving time and cost on both training and project work.

Consistent operation worldwide is assured by IEC 61131-3 compliance, while functional safety programming is certified in accordance with IEC 61508.

The AXC F 2152 PLCnext Control device from Phoenix Contact is shipping now from RS in the EMEA and Asia Pacific regions.