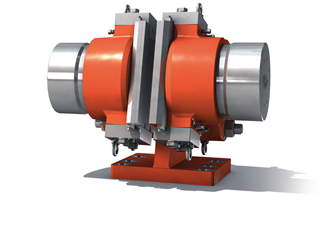 Over the last 45 years there has been a number of key changes that have taken place within industrial braking technology. Here, Steve Powell, Product Manager, Heavy Duty Clutch Brake Group of Altra Industrial Motion, tracks this evolution. Amongst the companies in the Altra group are Twiflex and Svendborg Brakes who have extensive experience in industrial braking.

Half a century ago, the overwhelming majority of brakes used in industrial applications such as mining, energy and the marine industry were drum brakes. Since that time, there has been a massive increase in the use of disc brakes. This was primarily driven by the automotive industry, which began to adopt disc brakes in automobiles in the 1970s.

Unlike drum brakes, which allow heat to build up inside the drum during heavy braking, the rotor used in disc brakes is fully exposed to outside air. This exposure works to constantly cool the rotor, greatly reducing its tendency to overheat or cause fading. The drum brake has only one surface to dissipate the energy during braking, whereby a disc brake has two making it more efficient.

As manufacturers of industrial brakes increasingly turned to disc brake technology, the last 45 years have seen a surprising leap forward in brake performance for a mature technology. Not only has brake torque increased and efficiency improved, but wear life has improved and maintenance requirements have reduced – helping to minimise lost production due to down-time. This has allowed brakes to be operational in extremely remote and inhospitable environments.

The unique challenges of industrial braking
Industrial brakes are often subjected to extremely tough and remote operating conditions. In the oil and gas, mining and marine sectors, these are addressed by a combination of brake design and high maintenance regimes. It is these challenging conditions that have opened up the opportunity to manufacturers for product development over the last 50 years. 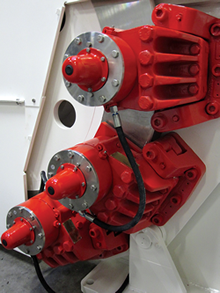 In environments with risk of explosion, such as underground mines, multi-plate friction brakes (which comprise a number of rotating discs mounted in an alternating patter with stationary annular friction pads) are often installed inside the gearbox (wet brakes) and use an oil-in-shear design, where the torque is transmitted by a thin layer of oil, rather than by the friction material, which could cause sparking. While wet brakes are inherently less effective than dry brakes, this is a compromise which has been developed to meet the specific demands of such applications.

Recently, as natural resources decline, there has been a trend to operating in more remote mining sites, such as Siberia. Brakes are certified for temperatures down to -20°C and there have been improvements in the high strength low temperature steels used in disc braking technology.

In addition brake designs have been developed where hydraulic oil is continuously circulated behind the brake pads to keep the actuation mechanism from freezing.

Above right: Driven forward by the automotive industry in the 1970s, disc brakes are now the common choice in most industrial applications.

Remote monitoring
Remote monitoring technology, especially by OE manufacturers, signifies a global shift in buying strategies. End users are prioritising long term value and more than ever before, considering the ‘Total Cost of Ownership’ above the upfront cost of components. While this can be traced back to shifting values brought on by recent global economic pressures, manufacturers of high quality components are able to increase lifetimes and efficiency while remaining competitive.

Twiflex and Svendborg Brakes provide a large range of monitoring devices including inductive proximity switches, micro-switches, 4 to 20mA analogue sensors to signal brake off, brake on and pad wear. These generate input/output signals which are sent to a PLC or used for remote data gathering.

Friction materials
For many years, asbestos was viewed as having optimal performance for industrial friction materials – and indeed provided a highly desirable combination of properties and economics. However, as the serious health-related hazards of asbestos came to the fore in the 1970s, other materials had to be developed.

New materials based on organic fibres or sintered metal first replaced, then matched and then surpassed the performance levels of their asbestos counterparts. The precise materials used in friction products are often regarded as commercially sensitive and remain closely guarded by the brake manufacturers who use a combination of materials on the market or their own formulations.

Testing has become an important factor in developing friction materials and now many manufacturers boast in-house test facilities. This in turn makes it easier for engineers to simulate application scenarios and develop bespoke deliverables which decrease down-time and troubleshooting costs.

All Twiflex and Svendborg Brakes products are subject to a cycling test and pressure test before leaving the factory. All critical brake components undergo non-destructive testing, with 100% testing prior to despatch, Twiflex has a full scale fatigue testing facility, comprising a climatic chamber which can simulate temperatures between -75°C to 180°C, as well as a fatigue room for brake cycling and an inertia test rig for dynamic stops. Svendborg Brakes also has a fully equipped test centre with a large inertia rig for friction and temperature tests, plus a cold climate room. 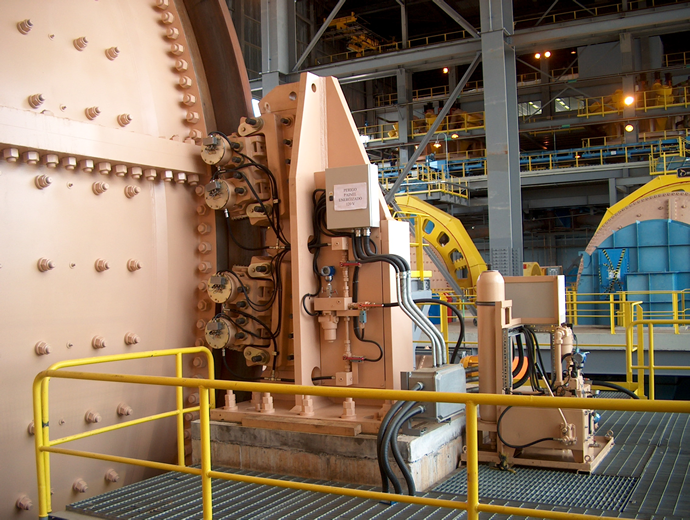 Above: Industrial brakes are often subjected to extremely tough and remote operating conditions

Improving maintenance
When no external power is supplied to a spring applied brake, the brake clamps shut, thereby locking the equipment in a fixed position. However, while this offers protection in the event of a power failure, it also makes maintenance a far harder task – when powered down, the brake is shut tight against the disc. The springs therefore need to be compressed to access the pads, which leaves a lot of potential energy in the brake.

Conventional designs employ a mechanical lock-out concept, in which a nut and centre bolt arrangement is used to hold the spring force and prevent the disc from closing during maintenance. However, if the nut should fail, the brake will close.
To address this issue, Twiflex has incorporated a Parked-Off feature into its modular brake range, which addresses the risk of brakes clamping shut unexpectedly during maintenance by alleviating the potential energy from the spring. It has a number of benefits:

Strategic global sourcing
Increasingly, customers want to buy a complete machine or system, rather than buying in best-of-breed elements and design and assemble the system themselves. The service no longer ends once the brake is shipped, and suppliers are offering value-added services, such as installation and service support to set them apart in a climate of increased competition from developing economies.

The group is well-equipped to specify components from well-known brands, which have been engineered into a bespoke, turnkey package from a single point of contact. With a global presence, Altra is then able to offer local installation and ongoing support services through 29 global production centres and 30 local support centres.

The next 45 years?
The last 45 years has seen revolutionary changes in the ways that braking systems are designed, maintained and supplied. What of the next 45 years? With friction materials having largely stabilised, we can expect an increasing emphasis on system design, ease-of-use and maintenance solutions.

The advent of the Internet of Things will no doubt further accelerate the trend towards remote monitoring, making industrial development and drilling exploration feasible in ever-more remote locations. Additionally, as manufacturers such as Twiflex and Svendborg Brakes work more closely with end users, they will continue to develop specialised solutions for every requirement - braking systems will continue to offer improved performance, reduced maintenance and, ultimately, greater productivity.