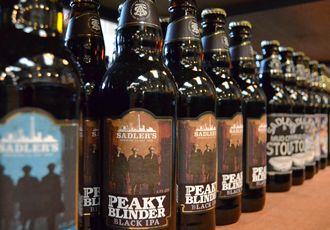 The perfect beer is a harmonious blend of art and science. Automation can help by performing the measured and repetitive tasks while allowing brewers to focus on more creative, interesting and rewarding aspects. So when Sadler’s Ales, a historic Black Country brewery, started to grow its business, it decided to adopt an automated process control solution from Mitsubishi Electric to improve productivity and make the quality of its craft beers more consistent.

The control system immediately proved to be intuitive for Sadler’s brewers and resulted in clear productivity gains.

Sadler’s Ales located near Stourbridge, in the Black Country has been crafting beers since 1900 and is currently run by Chris Sadler, a fifth-generation brewer. Popular brews in the company’s unique beer portfolio take reference from local subjects such as the Peaky Blinder range, which has proved an instant success nationwide.

The growing demand for Sadler’s beers led to the extension of the brewhouse, which contains all the equipment needed for the brewing process. This includes a mill to crush barley grains, a hot water tank, a mash tun to obtain wort and separate it from the mash, a copper to boil the wort while adding ingredients such as hops, a heat exchanger to rapidly cool the liquid, as well as several fermentation tanks and filter systems.

Chris Sadler, Managing Director at Sadler’s Brewery explained: “The new facilities should help us to quadruple production. Our goal is to produce up to 1,000 barrels a week.”

Reverse engineering the brewing process
The overall objective was to create a higher capacity brewing process that could be monitored and controlled more easily by the existing staff. Hence, Sadler’s contacted local specialist Clarke Controls & Distribution to help achieve the objective. On first inspection the technical team from Clarke noted the absence of any formal documentation, such as piping and instrumentation (P&I) diagrams. To address this issue, the team suggested an analysis of the plant to reverse engineer a new process control solution.

Ian Clarke, Managing Director at Clarke Controls & Distribution, commented: “The absence of any information on the existing control system set-up made the reverse engineering operations particularly challenging. Therefore, the direct technical and organisational support provided by Mitsubishi Electric was key to the successful completion of the project.”

A solution that addresses the brewers’ needs
For Sadler’s to gain the greatest advantage from the new control system, Clarke Controls & Distribution and Mitsubishi Electric worked closely with the brewers to determine their needs and build a bespoke solution around these requirements. Stephen Thornton, Key Account Manager at Mitsubishi Electric, explains: “Customer satisfaction is extremely important to us – so to make sure we addressed all the challenges and requirements relevant for the brewery team, we asked the head brewer to give us a wish list on how he would like the equipment to operate. Based on this, we developed the current system.”

The various pumps, compressors and fans in the system were fitted with either Mitsubishi Electric’s FR-E700 compact variable speed drives, or where appropriate the FR-F800 model that is specifically designed for maximum energy saving on pump and fan control applications. The various sensors and analogue components were connected to the control network using MELSEC ST Lite Remote I/O Nodes to include all the relevant process variables. 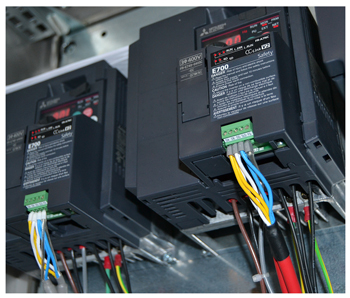 The inverters and I/O units were then connected via a CC-Link industrial fieldbus network, to a Q series Mitsubishi Electric programmable logic controller (PLC), which is designed to be ideal for building medium to large-scale control systems. The PLC is housed in a robust metal enclosure, linked to a GOT2000 Human-Machine Interface (HMI) that displays live information and alarms. As a result, brewers can monitor the equipment, as well as adjust the processes parameters live on the touch-screen operator terminal.

Thornton said: “We set the operator desk as the main focal area, locating the PLC and HMI there to centralise the control system architecture and provide easy access for control, maintenance and upgrades.”

Craft beers become smart
Whilst the reverse engineering task required advanced skills and expertise to complete – the operator controls needed to be the exact opposite; hence the bespoke control system was designed for ease of use and to streamline brewing operations. The benefits from the automated control system were immediate, as production skyrocketed by 300% in less than a month, resulting in 650 new barrels available every week, corresponding to approximately 200,000 pints of beer. 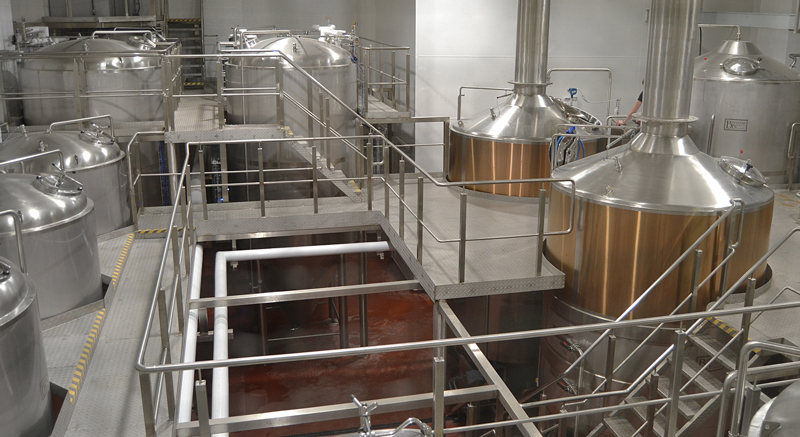 Sam Pegg, Production Manager at Sadler’s Brewery, commented: “I have been brewing without the support of an automated process control system for many years, so initially I was a little apprehensive if I’m honest. I was however, pleasantly surprised to learn how straightforward and easy the new solution was to use. The new control system has greatly improved my day-to-day activities from day one. Which means I can now focus on more interesting aspects, such as the development of new beers and recipes.”