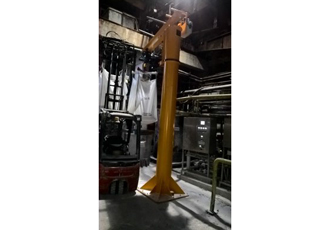 RDM, a cardboard mill located at Blandec near Saint-Omer in the Pas de Calais administrative department, consulted VERLINDE in March 2017 to install a motorised VFM jib crane to handle its Big Bags. RDM produces different types of cardboard for all sectors of industry. The mill had already called upon VERLINDE to erect an aluminium gantry crane designed for corrective maintenance applications.
20th August 2018

Lifting with safety and precision

In 2001, an entire SGT factory was fitted out after construction with VERLINDE handling and lifting components, as the designers shipped VERLINDE equipment already used in its Rezé plant directly from France. Today the partnership is still going strong.
24th July 2018 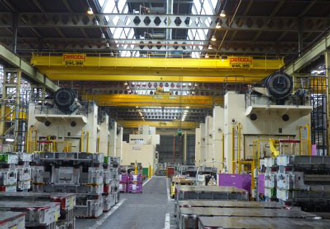 Verlinde’s Eurobloc VTF5 electric wire-rope hoists include benefits that are being leveraged within a large press shop at the BMW Group´s MINI plant in Swindon, UK. Two EUROBLOC VT5 crab units are deployed atop two 35-tonne double-girder cranes that were designed, manufactured and installed by VERLINDE´s UK agent, Pelloby. The investment represents the next stage of a drive to upgrade older lifting systems following a similar Pelloby installation at the plant in December.
26th February 2018 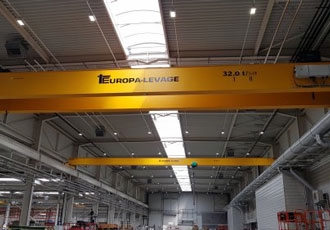 The new induction heating equipment plant of Belgian company INDUCTOTHERM are seeing VERLINDE hoists being installed to back up the latter´s seven overhead cranes and two semi-gantry cranes. INDUCTOTHERM EQUIPMENT BELGIUM, is a member of the international Inductotherm group and has been since1985. The company specialises in the design, manufacture and commissioning of induction heating equipment for use in the steel industry. The company delivers between 20 and 30 metal induction heating installations annually.
4th October 2017 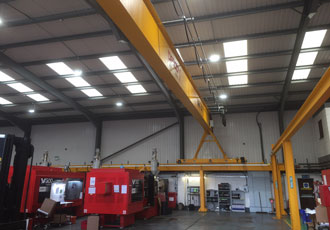 Providing a boost to operations at an injection-moulding shop in the UK is the Eurobloc VM3 Essential electric wire-rope hoist and crane kit from Verlinde. Offering 10 tonne capacity and 9m height of lift, the hoist is helping Cannock-headquartered Goodfish to lift mould tools into the company´s various injection moulding machines with an efficiency that serves to maximise production uptime.
16th August 2017
Datasheets

VT5 hoist is selected for 35 tonne crane at automotive plant 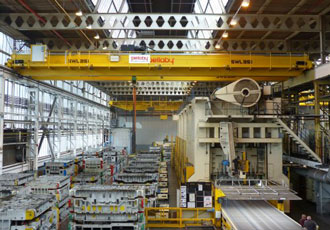 As three cranes are installed in the busy press at BMW Group´s Mini plant in Swindon, UK, the first crane features Verlinde Eurobloc VT electric-hoist technology. As part of a project to replace older lifting equipment, the crane is rated at 35-tonne capacity and is fitted with a Eurobloc VT5 electric wire-rope hoist from Verlinde. Based on an overhead double-girder system, the crane was designed, manufactured and installed by Pelloby, Verlinde´s UK distributor.
19th June 2017
Datasheets

Two cranes to facilitate both interior and exterior load travel 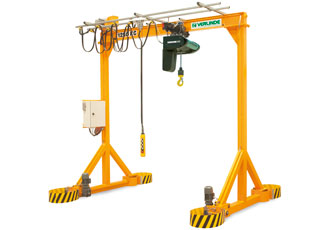 The VGI and VGIM gantry cranes presented by VERLINDE have the capacity to shift loads from 500kg to 6.3 tonnes. Fitted with manual or electric-powered hoists, the gantry cranes are time savers in all workshops even if girder cranes are installed. This gantry crane offers flexibility to the operator for shifting parts from one workstation to another without having to wait for the girder crane to be available.
23rd May 2017 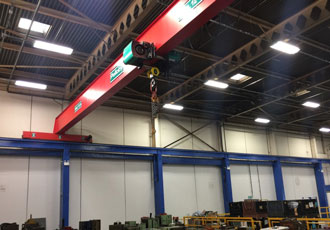 When a UK injection-moulding shop was looking to expand its operational capabilities, the installation of a 12.5-tonne capacity Verlinde Eurobloc VT3 low-headroom electric wire-rope hoist served to boost lifting capacity in line with the company's developing requirements.
12th May 2017 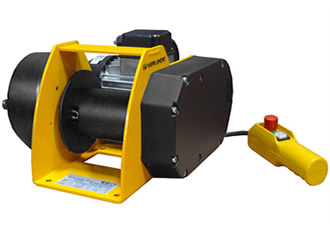 Complementing the top-ranking hoists mounted on overhead cranes to raise and shift any loads from 63kg to 250 tonnes in three directions, steel wire manual and electric winches have been designed by VERLINDE and intended for other lifting and pulling operations.
24th March 2017 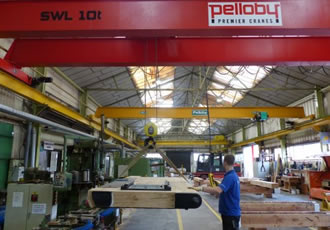 Helping the Canal & River Trust to lift and manoeuvre wooden lock gates for canals is the VERLINDE EUROBLOC VT3 electric wire rope hoist. The ten tonne hoist is part of a crab unit that was selected for its ability to offer dual speeds and high levels of operator control.
19th December 2016 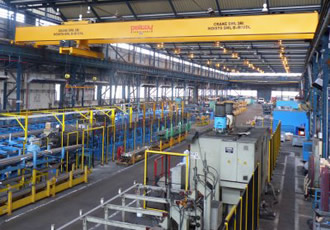 A turntable crane system has been installed at the Hereford, UK foundry of superalloy manufacturer, Special Metals Wiggin (SMWL), which features a pair of EUROBLOC VT3 series electric wire rope hoist manufactured by VERLINDE. Sitting either side of the crab unit, the hoists support loads up to a combined total of 16 tonnes. The bespoke crane system was designed and implemented by Pelloby, which has been working as a UK distributor of VERLINDE products for several decades.
13th October 2016

Cranes and hoists to save the day after warehouse fire

A reconstruction process at a busy warehouse that was severely damaged by a fire has started with a selection of Verlinde Eurobloc electric wire rope hoists and Eurochain power travel electric chain hoists that have been installed in conjunction with a series of Pelloby cranes.
25th August 2016

An electric wire rope hoist from VERLINDE has been integrated with a new 360° power slewing jib crane. It was at Yarmouth Harbour on the Isle of Wight, UK that EUROBLOC VT2 electric wire ropes hoist was fitted. Designed, manufactured and installed by UK distributor, Pelloby, the crane/hoist offers a safe working load of five tonne.
13th July 2016

PELLOBY recently installed a unique inverted travelling jib crane featuring a VERLINDE VT2 EUROBLOC wire rope hoist at the Science and Technology Facilities Council (STFC) ISIS complex at Rutherford Appleton Laboratory near Oxford.ISIS is a world-leading materials research centre which produces beams of neutrons and muons that can delve into the complexity of matter using a suite of beamline instruments, which gives unique insights into the properties of materials on the atomic scale.
15th March 2016

There are some 2,250 hydroelectric installations of various sizes in Metropolitan France whose power varies from 1,000 watts to several hundred megawatts.  436 of them are operated by EDF. Out of the total installed capacity of 25.4 gigawatts nationwide, EDF produces no less than 20 gigawatts or 13% of the company's total energy production.A smallish watercourse 70 km long whose source is in the commune of Gentioux-Pigerolles (Creuse department) and mouth at Saint-Léonard-de-Noblat (Haut-Vienne department) where it flows into the River Vienne is the River Maulde on which EDF operates six dams with a combined power output of 18 megawatts. Located at Martinex, Fleix, Langleret, Villejoubert and Lartige, the six gravity dams, most of them Ambursen type dams, roughly16m high, have buttresses spaced at intervals and are of identical design.
28th September 2015

There are some 2,250 hydroelectric installations of various sizes in Metropolitan France whose power varies from 1,000 watts to several hundred megawatts.  436 of them are operated by EDF. Out of the total installed capacity of 25.4 gigawatts nationwide, EDF produces no less than 20 gigawatts or 13% of the company's total energy production.A smallish watercourse 70 km long whose source is in the commune of Gentioux-Pigerolles (Creuse department) and mouth at Saint-Léonard-de-Noblat (Haut-Vienne department) where it flows into the River Vienne is the River Maulde on which EDF operates six dams with a combined power output of 18 megawatts. Located at Martinex, Fleix, Langleret, Villejoubert and Lartige, the six gravity dams, most of them Ambursen type dams, roughly16m high, have buttresses spaced at intervals and are of identical design.
7th September 2015 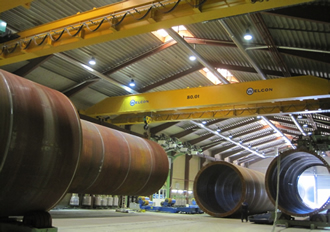 DANISH CRANE BUILDING (DCB) has more than 40 years of experience in cranes and lifting solution together with VERLINDE hoists. The company is the only crane builder in Denmark with the expertise and capacity to encompass every aspect of crane design, planning and manufacturing. DCB supplies overhead cranes, jib cranes, electrics wire rope hoists, electrics chain hoists andgantry cranes based on a broad standard range that can be adapted to suit each client’s individual requestsand needs.
10th August 2015

Verlinde is now marketing two EUROSTYLE series jib cranes the booms of which are made of EUROSYSTEM ALU aluminium hollow sections. EUROSTYLE VATAL and EUROSTYLE VFTAL are designed for loads of from 63 to 2000 kg, and through radial distances of from 2 to 8 metres depending on the model.EUROSTYLE VATAL wall mounted jib crane
26th June 2015
First Prev   Page 1 of 2   Next Last