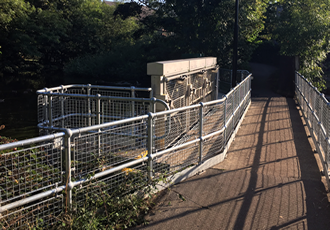 The Environment Agency’s multi-million pound investment along the River Thames has been further upgraded by ECS Engineering Services with the installation of three stainless steel sluice gates and an eel pass at Caversham Lock.

The gates update the existing water control facilities at Caversham Weir, an area that has seen water control infrastructure on the river since the late 15th century.

Type 316 stainless steel vertical rising sluice gates were specified due to their corrosion resistance and strength – an optimum selection for water applications due to a long operational life. The gates were coupled with Rotork Gearboxes and Christie VC-RAD handheld 110V actuators to move the gates during operation, allowing the operators full control of water flow through the three new gates.

Provision of a new suitable power supply to Caversham was also part of the works, therefore a single vandal proof control cabinet was also required to house the incoming power supply, authority metering and other electrical components. 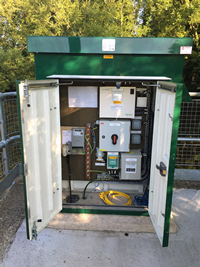 Improvement lighting was also required to provide an appropriate level of lighting for accessing, operating and inspecting the gates in storm conditions at night this being fed from the new enclosure.

The addition of an eel pass was also specified by the Environment Agency, due to a dramatic decrease in eel populations along the river over the last few decades. Sluices and weirs can greatly disrupt the migratory paths of river wildlife, consequently reducing the number of animals that reach spawning grounds to breed. The design of the pass allows the eels to use plastic brushes mounted in aluminium sections to propel themselves upstream, with the brushes specifically optimised for the eels and elvers. The eel pass serves to cause as little disturbance to wildlife as possible after the installation of the new gates, while also preserving the local fishing traditions surrounding them.

Jamie Wesley, Contracts Manager at ECS commented, “The continued Environment Agency investment along the Thames is helping transform the area. We are delighted to be involved in renovating the facilities along this popular stretch of river, while also offering the infrastructure to local wildlife so we cause minimal disturbance to the ecosystem.”