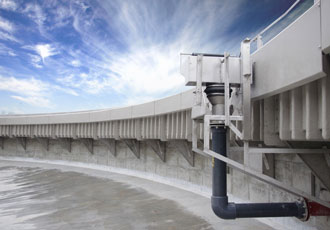 An innovative, high performance surface scum removal system for use in activated sludge processes that uses a collector arm to direct the scum towards a dipper has been developed by A&J Fabtech. Removed continually in small batches, scum presents few problems in sludge processing operations. However, if it is allowed to build up it can become an issue. There are several existing procedures for dealing with scum, although there is room for improvement in them all.

The simplest procedure uses a scum blade mounted on the bridge which is used to direct the scum into a scum box, which is also mounted on the bridge. From here it is pumped to the diffuser drum where it is broken up and sinks slowly into the settled sludge. Rotary scum removal is a variation on this in which the scum box is installed at a fixed point on the tank wall and has the advantage of being compact and retofittable to existing settlement tanks.

Suction lift scraper systems often use a siphon technique for removing scum. Scum is collected in a box via an adjustable weir and siphoned out from there, using either an independent siphon or tapping into the power of the siphon removing settled sludge from the tank floor. 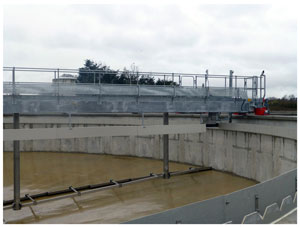 In the A&J Fabtech system scum is collected by the scraper arm and directed towards the scum box. The arm extends across approximately half the radius of the tank and acts as a concentrator. It includes a mechanism which pulls it against the tank wall when the rotating bridge is approaching.

Once the bridge has passed, the mechanism slowly returns the scraper arm to its extended position. In use the arm concentrates the scum with each pass of the rotating bridge, collecting scum and directing it towards the scum box. Thus the scum is thus continually collected so that there is no troublesome build up.

Used in conjunction with the dipping scumbox, the scum concentrator arm can be retro-fitted to existing equipment.