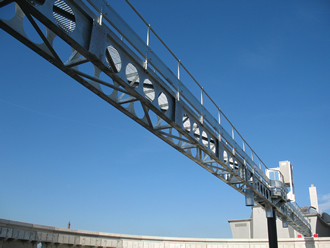 A safer, quicker and lower cost method has been developed for installing rotating full-bridge suction lift scrapers. A&J Fabtech has been commended for the procedure it used when working on Thames Water’s London Tideway Improvement scheme.

The company was commissioned to design, build and install twelve 40m diameter rotating full-bridge suction lift scrapers on the final settlement tanks at the Crossness Sewage Treatment Works near Woolwich in South East London as a turnkey contract and part of the Tideway project.

The bridges were built off site and included all mechanical and electrical equipment so that installation required minimal extra work on-site. The contract requirements also included full CFD (computational fluid dynamics) analysis of the tanks in order to verify that the EDI (Energy Dissipating Inlet) had been optimised for the prevailing flow conditions.

The decision to use rotating full-bridge suction lift scrapers was made so that the treatment tanks could be built as flat bottomed, with the tank walls prefabricated off site in sections. This reduced the on-site construction requirements - and its inherent risks - while compressing the construction schedule and lowering the overall cost of the tanks.

While conventional scrapers work by moving sludge to a central hopper for abstraction, suction-lift scrapers collect the sludge within the chevron- pattern scraper blades as the machine travels around the tank. The sludge is then abstracted directly by suction tubes from these points.

One of the most notable advantages of suction abstraction is that the level of suction can be adjusted at each tube from the bridge deck, so that the operation of each is optimised. Another major benefit of suction lift scrapers is the lack of need for a central sludge collection hopper or sloped tank floor, thereby simplifying civil construction and its associated cost greatly. This can also allow a deeper side wall depth, which improves the settlement flow patterns within the tank, thus improving performance. 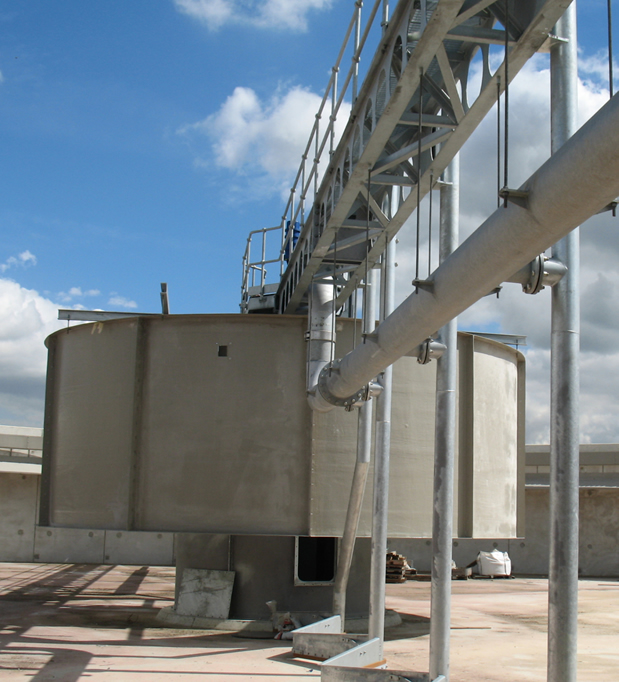 Abstraction-at-source also reduces sludge age within the tank and allows the outside of the sludge blanket to be removed preferentially. This reduces movement of suspended solids plumes over the weirs.

Standard features of A&J Fabtech suction lift scrapers include an automatic greasing system for the slew-ring bearing; loss of motion detection, over-torque protection and loss of suction or blockage detection to protect the core scraper functions.

Another element of the Crossness project was the automation of the aeration lanes launder trough through the addition of two activated sludge tank flow-regulating outlet launderers to the existing sixteen activated sludge plant aeration lanes. The launders self-regulate using electric actuators to match the outgoing flow rate.

However, a risk assessment showed that the need to access the aeration lane floor during the construction phase would have major health and safety implications for both the scaffold teams and site engineering team.

To overcome these A&J Fabtech designed and manufactured two removable working platforms which provided safe access to the working area – as well as reducing scaffold costs and speeding up time to completion.

Since the completion of the project A&J Fabtech has been presented with the Tamesis ‘Shining Contractor Award’ and has received a Letter of Commendation from Thames Water for the development and implementation of improved working practices that also delivered tangible cost savings.