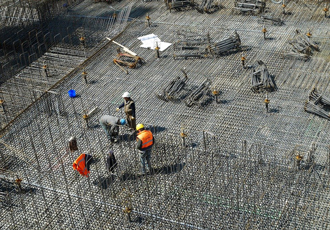 This mightn’t be as serious as a collapsing structure, but obviously an engineer wants their designs to be comfortable and secure for those passing through it. In this article, we’ll explore why human induced vibration is so important.

Resonance is when Object A vibrates at the same frequency as Object B. Object B resonates with this and begins to vibrate too. Think singing to break a wine glass! Although the person singing isn’t touching the glass, the vibrations of their voice are resonating with the glass’s natural frequency, causing this vibration to get stronger and stronger and eventually, break the glass.

Aeroelastic flutter is when a force is applied to Object B, which causes it to shake. It’s not necessarily at the same frequency as Object B’s natural vibration, but it makes Object B move all the same.

If an object is resonating, it’s also fluttering. But not everything that flutters is necessarily resonating. This is how confusion over disasters such as the Tacoma Bridge collapse occur — for a long time, and to this day, the event is used as a textbook example of resonance. However, it’s been argued that the bridge’s collapse wasn’t caused by resonance, but by fluttering.

Human induced vibrations cause structures to vibrate as human movement is applying force. Some instances would also see resonation happening too, but it wouldn’t be a certainty.  Engineers must design to reduce the damage or discomfort caused by either fluttering or resonating.

Human induced vibration can affect structures in many ways:

Newer designs that incorporate thinner slabs and wider column spacing in the column design are vulnerable to all types of vibrations including human-induced. Using structural design and analysis software at the design stage is an effective method for engineers to test footfall on a design and see the resulting vibrations.

Although vibrations are a natural occurrence, it’s essential that engineers minimise the effects from human footfall through structural design.