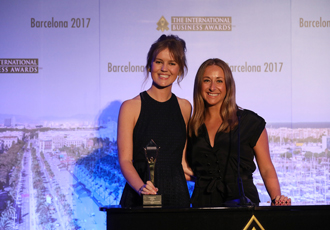 At the W Hotel in Barcelona, the festive ambience has really been brought out as the winners of the 14th annual International Business Awards were presented their Gold, Silver and Bronze Stevie Awards on Saturday, 21st October 2017. High-ranking representatives from more than 130 honoured companies and organisations from around the world received their awards on stage.

The International Business Awards (IBAs) are the world's only international, all-encompassing business awards programme. Many organisations and individuals from all over the world are among the 2017 winners. One of the top winners this year is the Spanish PR agency Llorente & Cuenca, which won seven golds, times gold Stevie Awards, 15 silvers, and 11 bronzes.

They also received a Grand Stevie Award for the Most Honoured Public Relations Agency. The marketing agency Hanaroadcom from South Korea, ASDA'A Burson Marsteller from Dubai, Cisco Systems from the USA and India, the Ooredoo Group from the Maldives and PT Petrokimia Gresik from Indonesia were also honoured with Grand Stevie Awards.

Among the winners of this year’s International Business Awards are 31 companies and individuals from the UK that have prevailed over the global competition. In total they’ll receive 68 Stevie Awards: 24 Gold Stevies, 29 Silver and 15 Bronze. This high number of Gold, Silver and Bronze Stevies is evidence of the great performance of British companies and managers.

The International Business Awards are open to all organisations worldwide. Organisations and individuals are eligible to compete, and can submit entries in a wide range of categories, including management awards, company of the year awards, marketing awards, public relations awards, customer service awards, human resources awards, new product awards, IT awards, web site awards, and more.

“We received a record number of nominations in the IBAs this year,” said Michael Gallagher, founder and president of the Stevie Awards. "It was great to welcome the Stevie Awards winners in Barcelona and to watch them receive their awards with pride and joy. The atmosphere was simply outstanding."