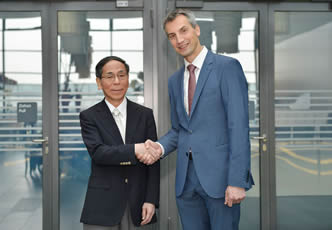 A joint specification was released at SPS/IPC/Drives 2016 between the CC-Link Partner Association (CLPA) and PROFIBUS & PROFINET International (PI), after their announcement to allow easy interoperability between CC-Link IE and PROFINET.

Over the past year, a specification to provide interoperability between the two protocols has been drafting. The development was guided in part by the white paper which in turn outlined the feedback of end users whose requests drove the cooperation.

Promoting transparency and ease of integration is one of the primary concerns for achieving concepts such as Industry 4.0. Many end users will source production machinery from across the world, which may result in machines in the same plant that communicate via differing protocols. This can lead to increased engineering work to achieve integration, as users are combining heterogeneous architectures that may not necessarily communicate as standard. End users of both networks flagged these challenges to both the CLPA and PI, who reacted quickly via the new cooperation to find solutions.

After less than a year of work, the specification will be made available to members of both organisations, which will allow them to develop hardware products to support the new specification.

The specification centres on the functionality of a ‘coupler’ device – which allows transparent communication between CC-Link IE and PROFINET. As a result, both networks can seamlessly share information. This can effectively achieve communication between differing parts of a line on separate networks, hugely increasing transparency and integration.

Both the CLPA and PI expect to see the first supported products coming to market sometime in 2017. This will effectively mean that the original concerns of end users which sparked the collaboration will have been addressed in under two years, displaying both organisations’ commitment to addressing users’ needs.

Karsten Schneider, Chairman of PI commented: “We are delighted to offer our users direct solutions to their requirements, in conjunction with the CLPA, whose aims are synchronous with our own.”

Schneider added: “The CLPA is pleased to be working with PI and our partners to offer support to end users who need this interoperability. The cooperation between CLPA and PI will directly help to make concepts such as Industry 4.0 a reality,” continued Naomi Nakamura, Global Director of the CLPA. “Increased openness and accessibility is what our end users demanded, so we are pleased to be able to support them fully with this new specification.”

More from The PROFIBUS Group