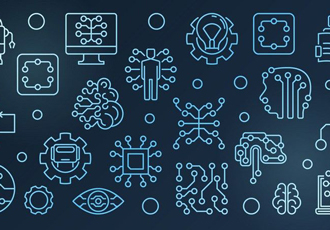 One of the greatest challenges of a machine learning (ML) solution, is being able to explain why a trained model gave the output it did for a given input. One could track down the network of neurons that activated or the value of the discriminant function, but it would still be difficult to explain the decision to a human.

I was introduced to Wind River partner Rulex, a company which deals in ML solutions that focus on solving the interpretability of a ML model. They do this by using a Logic Learning Machine (LLM) algorithm, which is able to output rules that describe the input-output relationship vs. a more traditional non-linear mathematical equation; these rules can then help create if then else statements.

The Idea
I had a small robot platform (Turtlebot3) sitting on my shelf, and I had zero inspiration of what to do with it, so when Rulex reached out to test their solution it dawned on me to use the rules generation in order to make the robot avoid obstacles using the readings from the LIDAR sensor it's equipped with. So the inspiration came and I wanted to experiment with ROS 2, Turtlebot3, LIDAR, and Rulex.

Robot and ROS 2
The Turtlebot3 is a small robot that is regularly sold as a ROS and ROS 2 experimentation platform. I chose ROS 2 because from previous experiences I already knew how ROS operated, so for the sake of experimentation I chose the second iteration.

The Experiment
First thing that needed to be done was to boot and run the Turtlebot, and that proved to be unnecessarily more difficult than expected.

After the robot was assembled I expected the following:

1. I would go online download a Raspbian image with the ROS 2 setup for a ROS node on the robot

2. Set up another ROS 2 (server) on a host machine

3. Have or install the and scripts to drive the robot with a keyboard ready

However, none of that proved to be the case. I learned that after assembling the Turtlebot you have to follow a readme to install and/or compile manually everything…a minor, but manageable inconvenience.

There was only one problem, the readme does not fully reflect the reality of the present, because you have to clone a repository without a commit id that snapshots the time the readme was written and the entire system was working, so I ended up learning that some ROS 2 components moved faster than others, and that it was almost impossible to align them.

I ended up getting a working ROS 2 install on Wind River Linux and I was able to finally move the robot around and read LIDAR data.

The Dataset
In order to provide a dataset for Rulex to train their ML with, I had to move the robot around and record the LIDAR readings, and the decision I made while driving in correlation with the reading. The convened upon format was csv (Angle1, Angle2, ...Angle360, Decision).

The LIDAR is supposed to have a range of 3.5 meters, but after testing it 1 meter seemed to be where the good accuracy limit was. The other issue was that if you held something in front of the LIDAR not all values would read appropriate values, for example, some of them would randomly drop to 0.

My initial thoughts on Turtlebot are that it’s a good recreational/hobbyist experimentation platform, but can’t expect much more from it than that.

Rulex and Final Testing
With the dataset built I contacted Rulex to build the rule set that would drive the robot in a scenario similar to the one done during the training process.

With a dataset I built that was smaller than I estimated would be enough, however I wanted to test out the algorithm (stress it a bit) and the logistics of running the robot was somewhat cumbersome, so I sent ~2400 filtered and curated entries, and after a short while I got some results back with insights into the data.

It turns out Rulex has a GUI that is able to both build the ML model/rules, and also analyse the input data so that the data scientist can understand what creates noise and what is redundant, as well as identify what factors contribute more to a decision, etc.

In a following meeting I was presented some of these features:

But more importantly the output:

While a typical ML algorithm would output a configuration file that describes a big equation and a binary file with the equation's parameters, Rulex outputs a readable C code describing the behavior. This from my perspective is the most important feature that makes this solution more relevant than a conventional one.

A format like this exposes the logic of a ML algorithm to the developer, which is especially relevant in safety domains where the availability and interpretability of the system is very critical. Having control over the ML logic and being able to explain why an output has a specific value is very refreshing for a ML developer, and in some domains is mandatory.

Another fun fact, during my testing I noticed that in some cases where the floor was too slippery, or it had imperfections, it would affect the turning, so from time to time the robot would spin out of control. And I was able to add my own simple rule to stop the robot if it started doing that.

Because I had a small dataset, the testing had to be simple, otherwise the robot would not behave as desired. However, in the videos you can see the robot avoiding the box and after the coast is clear, turning back straight since it enters a narrow corridor.

Conclusions
Because of the way the relation between input and output works, it cannot be an alternative to Deep Learning or Image recognition algorithms because the input is just too large and the amount of if statements would kill performance.

However, it actually provides value as an alternative to classical ML algorithms (decision trees, support vector machine etc.), in a professional, safety oriented, industrial or medical environment it might provide one of the best solutions to cover control and interpretability of a model.

In our specific case it also provided a software dependency free solution for doing ML in our VxWorks real-time operating system. Since the inference part of the model is done only with if statements, there is no reason to port a ML library, it also aligns with VxWorks core values of safety, small footprint and with the domains it targets (industrial, medical etc.)

While the experiment of using an autonomous Turtlebot robot using Rulex for decision making was a success, it doesn’t even scratch the surface of the wide array of capabilities that could be leveraged and/or challenges that could be solved with a complex set of rules. Stay tuned for my next experiment to share!