A spotlight on future industry leaders 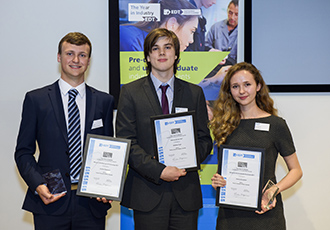 At a time when UK industry is voicing doubt about how it is going to source talented future recruits, the education charity EDT has highlighted the best of UK-based young talent at the recently held Future Industry Leaders Awards, sponsored by the Institution of Engineering and Technology (IET).

Three individuals who have completed a Year in Industry in their gap years and two school teams of sixth formers undertaking the Engineering Education Scheme received awards at the event.

Chief Executive of EDT, Dr Gordon Mizner said: “There hasn’t been a more pertinent time to invest in our future talent pool. We see the hundreds of employers that work with EDT benefit year after year through their investment in young people, many of which, having seen the enthusiasm and energy these future leaders can bring into industry, have them taken for further experiences as well as employment.

“Those who have received these awards represent the pinnacle of what is a very substantial body of young people who demonstrate ability, innovation, determination and self-confidence in all that they do. These young people have had the opportunity to see the excellent careers that UK industry can provide and can target their careers to being the industrial leaders of the future.”

The award winners were as below:

The Year in Industry Awards
Year in Industry 2017 National Award Winner: Matthew Pugh – working with EPSRC
EPSRC is the UK’s main agency for funding research and training in engineering and the physical sciences. Pugh’s project was to find a way to screen some 35,600 records, and to identify and then classify those which could be considered problematic. The task was by no means simple because the records consisted of free text entries created independently by thousands of researchers and they varied substantially in both length and detail.

Pugh developed a machine learning algorithm to assess the quality of the outputs with 98% accuracy. His algorithm enabled the division of reports into three categories two of which indicated acceptable or not acceptable quality while the third indicated a doubt on allocation which would require human checking.

Best Use of IT Winner (Sponsored by The IET): Andrew Robinson – working with PVI
PVI designs and manufactures automotive position sensors for some of the world’s most iconic cars. Robinson’s project was the further development of the Electro-Static Jet (ESJET) method for printed electronics, which is superior to current inkjet or screen printers. Robinson designed, manufactured and evaluated the first pilot line and print head nozzle system leading to printed nano-materials down to a 10µm resolution.

The initiative to redesign the original ESJET printing rig both increased safety of use and provided more consistent prints. As ESJET printing technology is entirely novel in concept, Robinson’s work has given PVI a head-start in the commercialisation of the technology. As well as enabling much more consistent printing and a reduced line width, the new glass capillary print head system that he developed has reduced the purchasing cost by 99%.

Environmental Awareness Award (Sponsored by Rolls-Royce): Victoria Bromham – working with Procter and Gamble
Bromham was working as part of a Research and Development team within Procter and Gamble and for one of many projects was tasked with reviewing one of its standard cleaning test methods, a key measure of product performance used to identify the best performing prototypes.

Bromham led the introduction of an automated system to apply the product during the test and then tackled the image analysis system which enabled automated, objective analysis of results. She partnered with a US software developer to design a more user friendly system and also produced an Excel reporter tool to extract and interpret the data generated.

Engineering Education Scheme Awards:
EES 2017 National Award Winner (Sponsored by Jaguar Land Rover): Kent College – working with BAE Systems
The team designed and tested a low cost robotic arm to aid someone with a low or non-functioning arm. The project required that the arm could be mass-produced rather than, as is usual, custom-built. The target user needed to be identified and design features tailored for their key requirements.

Innovation Award Winner (Sponsored by Forresters): Tavistock College – working with Rittal CSM
The team designed and tested the Twist Seal - a technical solution to the problem of sealing cables which run out of IT enclosures, minimising air pass through. After benchmarking current designs, the new design was developed. The team’s determination to succeed led them to create a product that was unlike any other currently on the market. This has now been patented and the team have been named as the inventors.