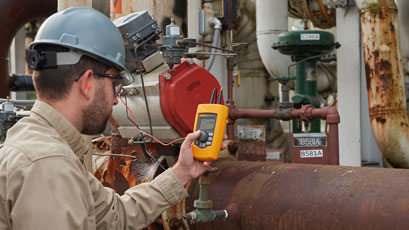 Availability of the Fluke 710 mA Loop Valve Tester has been announced by RS Components. This is an easy-to-use tool that greatly simplifies the testing of control valves, enabling the quick measurement of critical valve readings using a simple two-wire connection.

Traditionally, complex equipment has been used for control valve testing, but use of these complicated devices has meant extensive training for users, as well as removal of the control valve under test, and potentially one or two hours of bench testing.

However, the Fluke 710 offers built-in test procedures and a highly intuitive interface including valve status indicators.

Importantly, the device provides quick checks of control valves while they are in place in a system.

It sources the 4-20mA current loop signal and causes the smart control valve to move, while simultaneously interrogating the HART communication protocol data to collect critical diagnostic information about the valve’s position and status.

Therefore, the tester enables technicians to make fast and confident decisions on whether maintenance, and potentially system downtime, is required or not.

The built-in pre-configured valve-test routines offered by the Fluke 710 include: manually changing the mA signal and viewing the HART position and pressure variable information; full range ramping of the signal while recording the position or applied pressures, in terms of percentage from 0 to 100 to 0%; evaluating the valve’s response to changes in the mA input; speed tests to determine how fast the valve can open or close; and bump and partial stroke tests to test valves over a portion of their range.

Measurements and other test results are recorded and stored in the Fluke 710’s memory, where they can be uploaded to the Fluke ValveTrack analysis software, which is included with the tester.

This is enables technicians to plot logged valve tests taken in the field, as well as the ability to compare previous uploaded tests to recent tests.

The Fluke 710 tester is now shipping from RS in the EMEA and Asia Pacific regions.