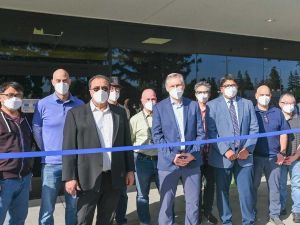 Mitsubishi Electric is expanding its MELFA CR series for cost entry-level robots users by adding a new slim, long reach 8kg load capacity articulated arm model. The RV-8CRL is suitable for anyone interested in economical machines for low-to-medium complexity applications, allowing them to effectively choose between SCARA and six-axis solutions at a similar price point.

While robots are becoming increasingly common on the factory floor, they do require investment and the Return On Investment (ROI) must be clear for any business interested in adopting them.

In this context, Mitsubishi Electric’s latest MELFA CR series of robots can help make the decision easier. Aimed at entry-level manufacturing applications where the dexterity of a six-axis articulated robot is necessary but the actual task it is performing is not super complex, the latest RV-8CRL is a suitable solution.

The RV-8CRL is slim and compact and can handle a maximum payload of 8kg, with an arm reach of 931mm but an installation pitch of just 160mm. The robot is designed to minimise the required capital investment without compromising the overall quality and capabilities of Mitsubishi Electric brand products.

To achieve this, some elements in the mechanical design were modified to optimise manufacturing costs. For example, over 200 screw connections were saved in this model, resulting in a substantial cost advantage passed on to users.

Managing the robot is also extremely simple as major functions are handled by the dedicated CR800 robotic controller which is very easy to use and clearly a bonus for first-time operators. Further programming of the new system does not differ from the top-of-the-range MELFA FR series of industrial robots; in both cases this is carried out via the intuitive RT ToolBox3 software. Seamless communication with other robots and devices is achievable via Ethernet making the networking aspect also as straightforward as possible.

When running, it features the same level of accuracy and repeatability as the top performance MELFA FR series, just at lower speeds. The main difference in operational capabilities between the two lies in the ability of the FR models to accelerate and work at higher speeds, increasing overall machine performance and productivity.

Suitable for a wide range of general applications, typical uses for the CR series include pick-and-place, material handling, loading and unloading, machine tending, part assembly and quality inspections. The robot is designed to be equipped with advanced grip systems and vision sensors to support technically demanding applications. It does also offer plug-and-play compatibility with MELSERVO MR-J4 servos to quickly create task-based systems such as a conveyor feed set-up with the aforementioned CR800 controlling up to 8 axes, providing simultaneous control of the robot and the servos.

The range of possible uses does not end here, as the RV-8CRL is not only suitable for industrial robot applications, it can also become a cobot. Similar to other articulated arm robots from Mitsubishi Electric, the new model is compatible with MELFA SafePlus, which allows it to work alongside human operators and support cooperative setups without the need for special safety PLCs. Key functions within this framework include Safe Limited Speed and Position as well as Safe Torque Off.

Barry Weller, Solutions Marketing Manager - OEM at Mitsubishi Electric, commented: “We are excited to introduce this new product to the range because it potentially lowers the cost of robot-based systems, making them accessible to more users. The RV-8CRL in common with the entire MELFA CR series offers precision and articulation comparable with our higher performance FR range, so the scope of application for systems built using it is still very wide. The fact that it is easy to use makes it even more attractive, especially to companies looking to purchase one for the first time.”