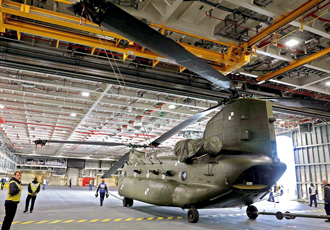 Sheffield-based SCX Special Projects has designed, manufactured and tested ten on-board cranes for BAE Systems. The cranes will be put into service on HMS Queen Elizabeth and her identical sister ship, HMS Prince of Wales. HMS Queen Elizabeth, which had her maiden voyage in June 2017 and is now joining flight trials with stealth fighter jets off the east coast of the United States, and HMS Prince of Wales, due for service in 2020, are the largest warships ever built or the Royal Navy, capable of carrying up to 40 aircraft each.
13th September 2018