How do we encourage more female engineer apprentices?

Home > Around the Industry > How do we encourage more female engineer apprentices?
13th September 2018
Source: Institution of Mechanical Engineers
Posted By : Anna Flockett 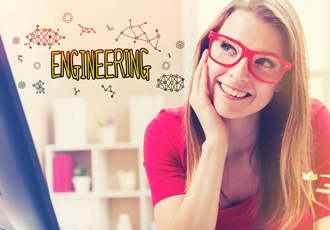 According to new research from the Institution of Mechanical Engineering, many more young women could be interested in becoming engineering apprentices but for them to be ‘converted’ to engineering, there needs to be more support and encouragement later in their school careers.

However, the study “Never Too Late: Profiling Female Engineering Apprentices” suggests that there are a large number of girls who might select an engineering pathway post-16 if there were more initiatives to encourage them after leaving school.

The research found that there is a wider opportunity than previously expected to ‘engage’ young women as they appear to make career decisions later than their male counterparts. It recommends that engineering careers initiatives should broaden their outreach to target young women aged 15-25.

Although women are under-represented in many STEM areas, this is particularly stark in engineering apprenticeships where just eight percent of apprentices are female.

“Female engineering apprentices are something of a rarity but there is no evidence that they are a ‘breed apart’” said Peter Finegold, Head of Education at the Institution of Mechanical Engineers and the lead author of the report.

“The UK school population may include many more young women who could be attracted to this career route, given the right opportunities.”

In addition to targeting a wider age range, programmes for attracting women to become engineering apprentices should broaden their approach to include those with interests in creative crafts and the arts.

Female apprentices have been shown to be more interested in these areas than their male peers and less likely to favour technology and “tinkering”.

The Institution-led study, which was also supported by the Gatsby Charitable Foundation, surveyed current and newly qualified female and male apprentices as well as non-engineering apprentices to identify the characteristics of female apprentices. The aim is to provide input into the design of policies to increase the representation of women in engineering career pathways.

The report’s recommendations include: