Tattoo artist/entrepreneur keen to keep manufacturing in the North East 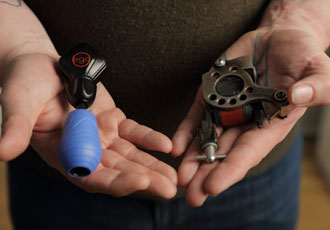 Originally his background was in computer gaming, but now Richard ‘Bez’ Beston has become a well-known engineer, turned inventor, in Sunderland as he wants to bring manufacturing back to the North East. After having a successful career in computer gaming deign and even moving to the US to work, Bez said the gaming industry became more like the film industry so he was keen to move on. “I’m terrible once I have achieved something, I get bored. I’ve literally tried all extreme sports.”

So from here he fell into tattooing. “It was a bit of an accident, after taking a break from designing all these games I just started airbrushing bits, as I had always liked art, and then decided to do a course on tattooing,” Bez explained. With the assistance of his friend Fi who now works in Bez’s studio, the North East’s biggest tattoo studio TripleSix, with him he was able to practice and teach himself how to become a fully qualified artist. “She is my oldest friend, and the only person at the time who I knew who liked tattoos so she became my guinea pig for free.”

Bez built up a bit of a reputation for tattooing the most intricate designs and for specialising in original pieces that he drew free hand. But after five years he said he “got a bit bored of tattooing” and trained himself as a design engineer by learning CAD. He said: “It was relatively easy as it was similar to the software we used when I was doing the computer graphics on gaming.” 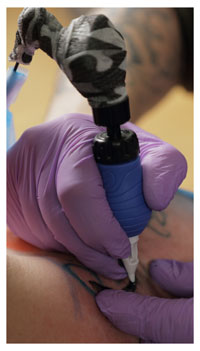 He used his new skills to design then build his own equipment for tattooing, but in a much more lightweight, comfortable and quieter way. He did this using custom-made igus components.

Six years on and Bez still has some of the first moulds. Most of the machines are super-lightweight and designed with wrist friendly action. Bez’s brand is called EGO as he said: “All tattooists have a massive ego, this brand was named after them and they still don’t realise.” He has a number of machines including the Switch, Polygon, V2, Vertex 2 and Apex Overkill. “Tattoo artists often get a lot of pain and have problems with their wrists and hands, so as well as this range of machines we have also designed a rubber grip to easily slide over an Apple stylus pen,” Bez explained.

As technology develops a lot of tattooists now used iPads to sketch so to have something to ease the pain is extremely useful, and Bez explained that the rubber mould grips are popular with dentists as well and could be used by anyone with hand problems to improve grip, like multiple sclerosis.

The first gun EGO produced was around six years ago and he has designed everything based on his experiences when tattooing. “When it comes to engineering we have just winged it for five years.” Bez started the idea off because he found the machines were off-putting to the artists and customers, and there wasn’t much in the supply chain so he believed he could do it better himself, and with the help of igus and their parts, I think it’s safe to say he has. 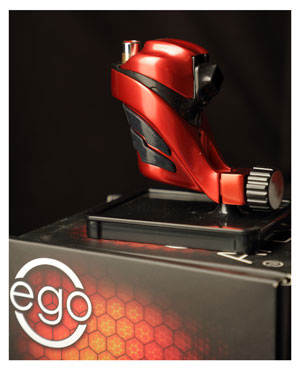 The problems for tattoo artists include the noise of the motor and the repetitive strain injuries that can occur on hands and wrists. They are tattooing up to 12 hours a day, so by having lighter components straight away it was going to make a huge difference, and would eventually make the actual tattooing smoother overall too, due to the more concentrated connection with the skin. Bez also redesigned the needle mechanism from a coil system to a rotary system, using customised igus bearings.

Bez described his relationship with igus as amazing, as he said they had a lot of time and patience and were very tolerant of what he wanted from the parts. The lighter, lubrication-free standard bearings damp the needle mechanism in the early models, while the later V2 model uses a new linear needle motion, converting rotary motion to a linear drive using rails, designed by Bez, producing far more accurate puncturing and has removed the side-to-side vibration. He also devised a rubber damping – or “power triangle system” – based on a car suspension’s rubber bushing. “Colour coded, each rubber produces a different grade of feel to fine tune,” he said. “At one extreme the needle pushes into the skin and it takes longer to come out. Turning the damper around gives you a softer hit but quicker retraction, for a different effect.”

A combination of the plastic bearings, more fluid linear action, lighter weight, smaller size and rubber moulded grip – also designed by Bez – reduces wrist strain, vibration and noise, allowing the artist to work on a subject for hours with no strain or noise effects. The igus parts are custom-made and lubrication-free. “We want zero maintenance for our machines. igus have been very good, many suppliers don't provide custom-parts in these small quantities,” said Bez.

He added: “We used to make a lot of plastic machines, but have tried to move away from that now as people just think of plastic as cheap, but actually plastic guns are a lot of money to mould and make.” 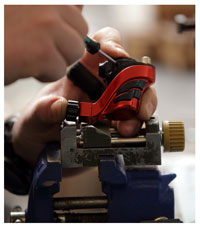 It was very refreshing to see that every step in Bez’s tattoo machines’ journey were completed by him and his team, even the packaging. “If you are going to spend a lot on a product then the packaging matters, it’s good when the product looks nice.”

Proving a success, EGO’s exports are growing, and Bez is close to securing an export license for India, a top three global tattoo market. His company, TripleSix, has a joint venture in China where a Chinese partner manufactures and distributes the machines under license, paying a royalty and minimising illegal copying that would be impossible to control without a joint venture. “We don’t have the facilities like other companies do, we have just used the money I made from tattooing and have funded ourselves.”

Bez is in a very strong position with his brand as he is expanding sales, is self-funded with no debt, markets himself on social media, and is moving his manufacturing operation into a bigger facility in Sunderland this month. So naturally for Bez he is more than ready to start something else: “I want other inventors to be able to see out their visions. I would like to open a creative hub, where people book time and I can help them design new bits, then discuss new products and help them with manufacturing them.” 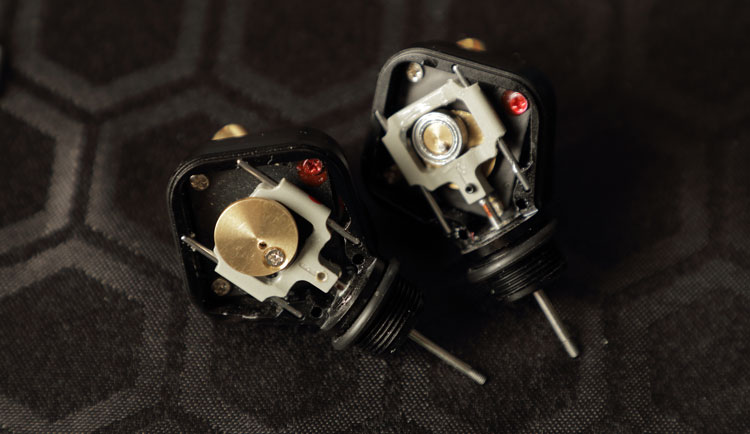