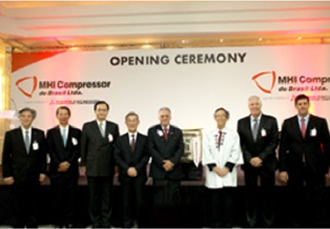 Plans call for MCO-B to develop the Latin American market for compressors, with a focus on expanding sales of compressors for use on Floating Production, Storage and Offloading systems (FPSO), a market expected to see robust demand as Brazil develops deep-water oil fields. Initially the JV will work to strengthen its sales and after-sale servicing functions, to be followed by the commencement of local manufacturing in the near future.

The opening ceremony was attended by a large number of stakeholders including MCO President Hiroaki Osaki and guests. Guests included the Japanese Consul General in Sao Paulo, the mayor of Piracicaba, and representatives of major local and overseas clients and engineering firms such as Petroleo Brasileiro S.A. (Petrobras), Braskem S.A.

MCO-B was established in March 2016 with MCO and MC having respective ownership stakes of 70% and 30%. The head office is located within a factory operated by NG Metalurgica (NGM), a Brazilian machinery manufacturer in a business tie-up with MCO. Preparations have been under way here since April toward launching operations on full scale. MCO-B has a sales office in Rio de Janeiro staffed by employees who previously handled compressor operations at two MHI and MC affiliates headquartered in Sao Paulo city: Mitsubishi Industrias Pesadas do Brasil and Mitsubishi Corporation do Brasil, S.A. In this way, since MCO-B's launch efforts have focused on the creation of unified sales and maintenance systems.

The opening ceremony was carried out in conjunction with the announcement of the start of full-fledged operations following the completion of preparation of sales and after-sale servicing structures manned by a total staff of 11. Going forward, collaboration with NGM, which performs some local assembly operations for orders placed for use within Brazil, will be further expanded, and maintenance, repair and other after-sale servicing functions will be strengthened to enable swift response to customer needs.

Petrobras is now undertaking a project exploring for oil in Brazil's offshore pre-salt layer. Over the long term, together with the broader Latin American market, considerable demand is expected for FPSOs, systems that require multiple compressors for gas compression, transportation, processing, etc. MCO meanwhile has been steadily building up its track record in the Latin American market. Since the 1990s the company has delivered more than 100 compressors and mechanical drive steam turbines; and since 2010, when it received its first order for carbon dioxide (CO2) gas injection compressors for installation on an FPSO, MCO has received orders for, and completed deliveries of, numerous compressors for FPSOs.

The newly inaugurated MCO-B will also work closely with Mitsubishi Heavy Industries Compressor International Corporation (MCO-I), a Houston-based Group company that serves as a core manufacturing base for MCO in the Americas. Going forward, this collaboration will further boost the competitive position of MCO products within the Latin American compressor market.