From science fiction to reality 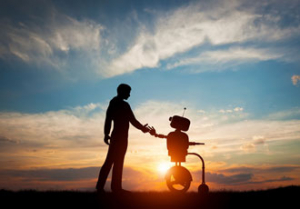 Science fiction has a long history of inspiring technology that we now use on a daily basis. The creators of Star Trek first envisioned sliding doors and cell phones back in the 1960s, while video calling was already being referenced in 1927 classic Metropolis. But what about manufacturing? Here Neil Ballinger, Head of EMEA at EU Automation, gives five examples of industrial automation technology that was once science fiction, but is now a reality.

When it comes to solving complex manufacturing problems, we could all use some inspiration. Looking back at what used to be the domain of sci-fi literature and movies can be great way of stimulating creative thinking and approaching common manufacturing issues from a new perspective.

In the 1955 short story Autofac, Philip K. Dick described a world dominated by self-replicating robots who work incessantly, monopolising and eventually depleting the planet’s resources. Self-replicating robots are now a reality at the FANUC plant of Oshino, Japan, although they’re now having a much better impact on our lives.

In this lights-out facility, robots produce other robots at a rate of 50 per 24-hour-shift, working without human intervention for up to 30 days consecutively. The robots take care of all aspects of production, from parts delivery, to assembly, testing, packaging and shipment.

The Iron Man armour has become iconic since it first appeared in Tales of Suspense, in 1963. The suit amplifies Tony Stark’s lifting capacity by approximately 85 times.

New exoskeletons can now give factory and warehouse workers the superstrength they need to life weight for up to eight hours a day without strain or injury. For example, the new Guardian XO from Sarcos Robotics is a battery-powered exoskeleton that can make 100 pounds feel like five. Sensors in the chest and shoulders help the robot adapt itself to the wearers’ body and even support their weight in case of stumbling, preventing slip and fall accidents.

In Iron Man Mark II, the armour allows Tony Stark to fly at supersonic speed. Since 2016, inventor and entrepreneur, Richard Browning has dedicated himself to developing the closest real-life alternative - a patent pending jet suit that enables unparalleled human flight.

His startup, Gravity, offers custom-made jet suits, as well as a two-day training programme to become one of the world’s few Jet Suit pilots. Gravity suits are not currently used in industrial applications, but they could soon become a reality in warehousing and logistics, as well as in aeroplane maintenance.

The Netflix series, Stranger Things depicts a dystopic parallel universe called the Upside-Down. Nothing that terrifying exists in the real-world, but some similarities exist between the concept of parallel universe and that of digital twinning.

A digital twin is a digital replica of a physical process, product or device that allows design engineers to run simulations before the physical entity is even created. Like in a parallel universe, scientists can use digital twinning to determine what could go wrong in the development and use of the physical entity. Digital twins are currently used is a variety of design engineering applications, as well as in construction.

In Star Wars, lightsabers, the iconic weapon of the Jedi Knights, are glowing blades that contain enough energy to easily cut through metal.

Industrial plasma cutters have similar characteristics. Plasma, the fourth state of matter, is created by stripping a gas's atoms of their electrons. This process is called ionisation and it causes the material to glow. Because plasma conduces electricity, it can convey a large electrical current to the target material, heating it up to the point of cutting it.

Two magnetically contained tubes of plasma would pass through each, so it’s still not possible to engage in epic lightsaber duels with plasma cutters. They are, however, perfect for a variety of metalworking applications.

These examples prove that what we believe to be impossible today, might become a standard manufacturing process in the near future. There’s no easy way of predicting what the next big futuristic idea might be, but to stay updated with the latest innovations in automation an manufacturing, you can always visit EU Automation’s Knowledge Hub.