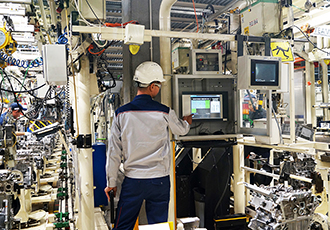 When the management at Toyota’s engine and power transmission manufacturing plant in Wałbrzych, Poland, looked to increase the availability of its production lines and improve the transparency of data, it faced the challenge of not only ensuring the implemented network would offer the necessary performance, but also of integrating multiple devices from a range of different vendors.

It met these challenges by implementing open gigabit CC-Link IE technology, the industrial Ethernet technology with the greatest bandwidth.

Spread across two sites in south-western Poland at Wałbrzych and Jelcz-Laskowice, Toyota Motor Manufacturing Poland (TMMP) represents Toyota’s biggest engine and transmission manufacturing operation in Europe. While the larger engines in the Toyota range are produced at the Jelcz-Laskowice, with a capacity of 180,000 units per year, the bulk of the engine production, as well as manufacture of power transmission products, takes place at the Wałbrzych plant.

Constructed in 1999, the Wałbrzych plant commenced production in April 2002, and today produces over 633,000 units per year, with a capacity of over one million units when running three shifts. The plant’s output includes the 1L petrol engine for the Toyota Aygo and shared platform vehicles from Citroen and Peugeot, as well as forged parts. These include crankshafts and connecting rods to supply Toyota Manufacturing UK (TMUK) in Deeside where the engines for the Avensis and Auris are manufactured, plus, gear blanks and forged sleeves to supply Toyota’s plant in India.

With a total site area of 520,000 m2, including a plant floor area of some 100,000m2, the Wałbrzych plant includes engine assembly lines and forging lines. When the lines were constructed, the communications requirements were quite simple. However, an increasing need to extract greater volumes of data in order to better monitor the manufacturing processes had led the company to reassess its networking requirements, with the idea of upgrading network systems in both the engine assembly area and forging area.

Within the forging lines, the network upgrade requirements were just as extensive, as TMMP manager for manufacturing within the forging plant, Manufacturing Engineering Manager for TMMP Damian Mroziński, explained: “There are nine forging lines, each with a number of different machines. The largest of which is a 5,000-tonne press that was originally designed separately, with only basic data transfer between each machine. But we wanted the capability to transfer increased volumes of data between the various machines, so looked at an appropriate network choice to connect the various machine controllers.”

CC-Link IE (Industrial Ethernet) and CC-Link fieldbus proved the obvious choices. “We opted for CC-Link technologies because they are so easy to implement,” said Mroziński. “In all, we integrated 13 stations, with CC-Link IE providing the communications from machine to machine, and CC-Link providing data transfer between each machine and its subsystems, such as our FANUC robots. Despite the seeming complexity of the requirement, we completed the whole installation during our two weeks of scheduled annual shutdown.”

Investigation of the options led TMMP to CC-Link IE, an open gigabit industrial Ethernet network technology. This was seen to offer a number of benefits for the engine assembly area, as TMMP Assistant Manager, Maintenance Engineering, Andrzej Zębek explained: “The engine assembly is carried out across four lines – an inner assembly line, a head assembly line, a middle assembly line and a finish assembly line. Not only did we want to be able to ensure better data transparency across these lines, but also integrate a range of third party products, including Mitsubishi Electric GOT2000 HMIs and Balluff IP67 I/O blocks to create a poka-yoke system to improve quality in areas of assembly involving manual component picking. We wanted a network that would give us the freedom to choose products from several vendors.”

Maintenance Engineer Radosław Serafin adds: “In all, we were looking to integrate around 2,000 I/O points, connecting numerous devices from different vendors, including 48 Mitsubishi Electric HMIs, and ensure fast data exchange. We didn’t want to end up being tied into buying products from a single brand – that was very important for this project.”

TMMP opted for CC-Link IE as it provided the required communications speeds, with the capability of delivering a flexible and modular solution. Further, with over 1,700 CC-Link IE and CC-Link enabled devices available from over 300 vendors, TMMP could select the best devices to build the poka-yoke system that it wanted.

John Browett, General Manager of the CC-Link Partner Association (CLPA) in Europe, commented: “CC-Link IE has built its success on the twin pillars of performance and openness. This openness was key in Toyota’s case, as it meant they had the freedom to source products from leading suppliers, including Balluff and Mitsubishi Electric.”

The technology quickly proved its worth, with TMMP enjoying maximum availability, increased data transparency and improved production quality, across a production line that is now able to make a new engine every 50 seconds. Mroziński added: “CC-Link IE was quick and easy to implement, and simple to use.”

The benefits of a more connected production facility

TMMP is already reaping the benefits of the installation across the engine plant and forging line. Not only has the CC-Link IE network reportedly proven to be exceptionally robust, the diagnostics capabilities mean that when there are problems they can be fixed very quickly.

There is more to come at the plant as well, as Mroziński explained: “The upgrade of the single forging line was really a pilot project, to assess the benefits. We are now looking to roll out CC-Link IE technology one by one across the remaining forging lines.”

Going forward, the increased data transparency could also provide TMMP with key tools in a journey towards Industry 4.0. Providing a foundation of interconnectivity between production machines, and to field devices, the network is ready for wider connection to higher-level enterprise systems. This sort of connectivity enables manufacturers to push further in addressing the production challenges of tomorrow.

Browett concluded: “We’re very pleased to see a major international corporation like Toyota using CC-Link IE and CC-Link in their manufacturing lines. This is a very good demonstration of the many benefits that this robust, reliable, open network technology offers.”