Proving there is no I in team

Home > Women in Engineering > Proving there is no I in team
9th December 2019
Source: Electronic Specifier
Posted By : Anna Flockett 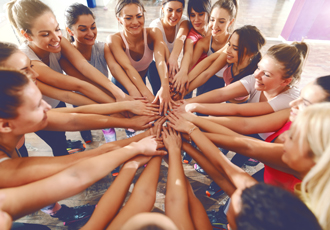 You can’t always plan for everything, because more often than not life is what happens when you’re making other plans, as John Lennon said. That certainly was the case for Dr Catherine Ramsdale, VP of Device Engineering at PragmatIC as she explained she didn’t always know what she wanted to do, and as much as she has achieved in her career, it is down to natural evolution in the industry.

Ramsdale recently caught up with Electronic Specifier to discuss how she got into her job, how she finds working in the engineering industry as a female, what challenges she has faced on her journey and what changes need to be made.

With over 15 years’ experience in printed electronics R&D Ramsdale has been in her current job at PragmatIC for around eight years, starting just after the company was founded back in 2010. Working in ultra-low cost flexible electronics, PragmatIC enables the potential for trillions of smart objects to engage with consumers and their environments. The solutions PragmatIC develop provide new opportunities for functionalities as well as extending proven applications such as RFID and NFC into previously prohibited mass market use cases.

Since joining PragmatIC the company has grown significantly, and Ramsdale described it as an amazing place to work, and how much she loved her job. “I like the variety and I like that fact that what I am doing is worthwhile, and how it impacts society. This work helps societal challenges that contribute to the planet – a very important issue in today’s society.”

Talking about how she first got into the industry and the natural evolution, Ramsdale said it all started with studying sciences at school as that is what she enjoyed the most. Then going on to university, Ramsdale studied physics and German at Imperial College London, which then led to her going on to work in Germany. “It seemed to fit as they were, and still are, a very forward thinking country when it comes to renewables. It could have just been the perception of me as 19-year-old, but there seemed to be a lot more recycling bins over there and they seemed to be ahead of the UK. We have all certainly moved on in terms of renewables and recycling now, but 20 years ago Germany seemed a lot further forward.”

After coming back to the UK Ramsdale embarked on a placement where she focused on solar cells, she explained: “I then progressed to do my PhD in organic photovoltaics. The group that I was working in at Cambridge stemmed out of a company looking at flexible electronics, and flexible organic transistors, and so I jumped on that as I had a relevant background, and that eventually led me to where I am now, still working on flexible electronics just with a different firm.”

As her career progressed and she moved into more senior roles, it was then that children arrived. She explained: “After my first born I went part-time as I realised I couldn’t do it all, I tried to keep working full-time and keep going as much as I could, but it’s really not possible, so I dropped down to three or four days a week. Then after I had my second child, I dropped my hours even more – after having children it really does give you a different outlook on life. I then decided to take a career break. It was all just a natural progression in my life.”

She explained that it is hard adjusting to a big change: “When you go on maternity leave and then come back and you find the world hasn’t fallen apart, it gives you another perspective and for some it must be hard to see that.”

PragmatIC contacted Ramsdale while she was taking time off from work and just asked for a chat. “I told them I couldn’t work full-time as I had small children, and I agreed to work for them with the knowledge that I would be off here and there picking up and taking the children to school, and going to school plays and parents evening, and they were fine with that.

“And that reflects really well on a company. It is about give and take and treating everyone like a grownup – I can’t fault PragmatIC, they were amazing.”

When asked if Ramsdale believes having children impacted her career she answered: “I don’t think it has impacted me at all, but if it has I’m okay with that. You make your own choices in life, and more than anything now I feel privileged to have the choice.”

Talking about whether she has ever felt like she is in a minority within the industry, Ramsdale explained: “When I was studying my original degree at Imperial that was a heavily male dominated space, compared to studying for my PhD at Cambridge. That was much more diverse and not just in terms of gender, but also culture and ethnicity too. I wouldn’t necessarily categorise myself as a ‘woman in STEM’, I just happened to have studied physics.”

Ramsdale studied at the University of Cambridge from 1999 to 2002 and graduated with a PhD in physics, an amazing achievement that contributes to her impressive portfolio of work.

When picking her education choices Ramsdale was surprised to find that in the UK there was only seven university choices for her to study both physics and German at the same time. “For me to study a language with a science, not many universities offered this as an option, and studying at Imperial there was only two people doing it - we really should encourage more people to learn languages not deter them. Speaking another langue is such an important and useful skill to have.”

She added: “I like doing a bit of everything and changing it up. I really liked studying languages, I think it gives you a broader look on life.”

Reflecting on some major moments in her career, Ramsdale explained she has worked most of her life across two companies, and both companies have allowed her to do some amazing work including taking a technology and scaling it up to major transistors. “It’s major moments like this when you take a step back and realise how amazing your job can be.

“You see projects go from very small to major accomplishments and all of a sudden there is an automated system, you see you have worked on it for a long time with multiple people and you feel a sense of achievement.”

There was another moment of realisation for Ramsdale as she explained: “You need to get to a point where you realise you are not indispensable, but you are part of a team and contribute a lot to that team, but at the same time it can carry on without you. A team is always bigger than any one person.”

Feeling proud of her career and the path she has taken Ramsdale reflected: “I don’t think I have faced any challenges because I am a woman. There probably are more men than women in the technical roles here at PragmatIC, but there is such a diverse range of people from so many different counties and cultural backgrounds. You need diversity and very importantly you need an adverse way of thinking, having a range in people’s personal thoughts and experiences is imperative to success in a company.”

Again both the companies Ramsdale has worked for have been very diverse geographically and in mind-set, and Ramsdale highlighted again that you don’t need to be diverse just in gender – overall it’s about being diverse in people and personalities.

We both agreed that although the industry has come a long way, there are still some issues to be addressed. Ramsdale stated: “There are still things to do in sciences to make it more diverse. History gives the impression it’s all about the individual doing great things, but really it’s actually about teamwork. The key to making things more diverse is discussion – this will help especially with women.”

Talking about some examples Ramsdale described that often when you interview for a new job, you don’t get CVs from girls, so when do we lose these girls in the system? Ramsdale believes its early on at school level. She said: “We need to show early on it’s more of a team environment and we are helping to try and save the world. You can interpret that in any way you want, but either way it’s a positive thing. We need to be repositioning how we portray sciences at school.”

One way to do this is to have more collaborations. Ramsdale said she attends the Cambridge science fair and every year there are more and more partnerships between the industry and universities and the industries and schools. “Anything that promotes connections between sciences and schools is what we need to focus on. Sometimes it can be difficult to get across how significant science is as a whole subject, there is a lot of work for the science community to do to boost this.”

A lot of people always ask the question ‘who inspired you?’ or ‘what role models did you have?’ but when asked, Ramsdale said she wasn’t inspired by a single person, but instead she saw different traits and inspirational qualities in different people. “I’m inspired by different parts of different people, I look at everyone around me, and everyone has something different to teach and something you can learn from. For me it’s more about finding the inspiration from everyone, and I have gained a collective understanding from a group of people over the years.”

It was clear speaking to Ramsdale, that she is a lady with many talents and skills in life, and helping set up a school science club at a Cambridgeshire infant school was another achievement. Ramsdale explained: “I ran it for five years, while my children were there and for a while after, and was looking to show the children the collaboration between nature and science. For example, why is the sky blue? And then showing them coloured filters with lights shining through them.

“One of the children then asked me ‘if the sun is yellow from here, then what colour is it from the moon? And I thought to myself you would have never asked that question if it wasn’t for this club and experiment, and I could see that spark of inquisitiveness nature, and that is exactly what I wanted to achieve – it was so amazing to see.

“And that is the sort of person you want to carry on through life, you don’t want them to lose this inquisitive nature - seeing such a young questioning mind-set made me proud. That was a great experience, just helping the children to see different ways and evoking new thoughts and questions. Plus, I enjoyed it as it is always nice to be doing experiments where you know what the outcome is going to be!”