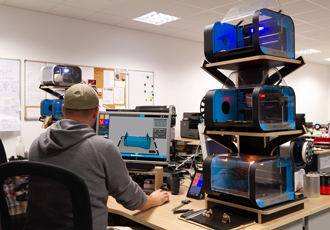 3D printing is already revolutionising the world of design engineering and manufacturing, from aerospace through to the automotive and medical industries. Yet many UK companies, especially small-to-medium enterprises (SMEs), are still reluctant to adopt this technology, often due to cost. This is where scalability comes in. Here Chris Elsworthy, MD and Lead Mechanical Engineer, CEL-UK explains why a scalable network of small 3D printers is what today's design engineers need.

Contrary to popular belief, 3D printing doesn’t necessarily require a huge investment upfront and often generates a significant ROI. A scalable network of small, desktop-sized 3D printers is what most UK businesses, no matter how small, can aspire to. It can help design engineers transform their day-to-day work, boosting both efficiency and creativity.

But what does ‘scalable’ mean when it comes to 3D printing? Basically, it means starting small but thinking big. A business may only need one or two small machines, initially, but has the opportunity to scale up its 3D printing capacity – by adding more machines to the network – as soon as budgets allow or workflow demands. Ultimately, keeping cost and footprint down is a priority for many SMEs, so opting for a small, networkable 3D printer seems like a sensible choice.

Until recently, most 3D printers tended to be relatively large, expensive and complex, which meant that this technology wasn’t for everyone. But, over the past few years, 3D printing has leapt forward, becoming a fully-formed and usable tool. Like standard 2D printers, some of the latest 3D printers are small enough to sit on a desktop and become an integral part of a design engineer’s toolkit. They are also plug and play meaning that they are almost as easy to set up and use as a 2D printer. 3D printers have also become more affordable and so have printing materials; strikingly, a reel of filament can even cost less than filling up a 2D printer with ink. 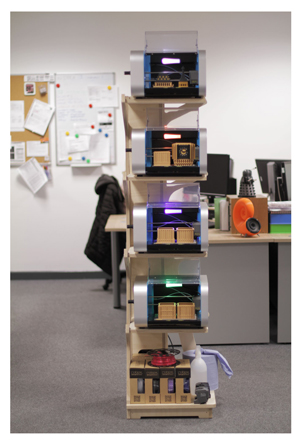 After all, a desktop-sized 3D printer may seem small, but its build volume is usually big enough to handle any print with a footprint of a A5 sheet of paper (or smaller). Most prototypes and parts are rarely bigger than that and, even if they were, they could always be split into smaller prints using software such as Windows 3D Builder and reassembled at the end. Design engineers can use this technique to their advantage.

Whereas a large print can take hours (if not days), splitting it into smaller prints, across multiple machines, can make the process much faster. Risk is also minimised as, even if one print fails, only that print will need to be restarted while the others will continue at speed. This means not having to scrap the whole model and restart from scratch.

Another advantage that comes with a network of desktop 3D printers is that it enables design engineers to produce small bespoke runs and test ideas as they go. They can easily make changes to a design, print, test and rework until that design is right. Big improvements can also be made to other processes, for example, by creating custom jigs and fixtures to hold a workpiece or form a shape. Over a short period of time, the initial investment in the hardware will be offset by significant saving on outsourcing prototyping.

The beauty of scalability is that new 3D printers can be added to an existing network at any time and integrated into the design workflow. In this way multiple 3D printers can be connected quite easily and operated using the same interface (through a network or a connected workstation). The issue of space is addressed in a stackable system: all printers stack neatly one on top of the next to provide maximum printing area for minimal footprint.

Ultimately, a scalable and stackable 3D printing system is designed to grow and evolve according to a business’ needs.  Unlike an individual machine, it enables virtually every design engineer in an office to gain immediate access to a 3D printer (or even multiple, stacked machines) and unleash their creativity while boosting efficiency and productivity.