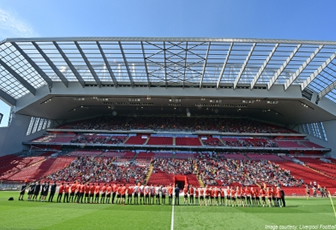 Liverpool Football Club’s Anfield stadium, has received a new makeover from Jacobs Engineering Group, on its Main Stand. The work was completed just in time for this year’s new season to start.

The Main Stand of the stadium has been transformed into one of the largest all-seat single stands in European football, with a combined interior floor space five times larger than the football pitch.

Accessibility has been improved, and some 8,500 additional seats have been added. The redeveloped stadium opened for its first game earlier this year, on 10th September 2016, providing Liverpool with its biggest ever home game crowd of 53,000 fans.

Jacobs designed a new upper tier including the installation of a large cantilevered roof over the existing roof, which was later demolished. The new and existing elements of the stand, dating back to 1906, were ultimately joined together and the seating re-profiled.

The expanded Main Stand’s structural engineering incorporates a 140m roof truss, equivalent to the length of two jumbo jets end-to-end. The works were completed within the 12 week season close period during the summer 2016.

In making the announcement, Jacobs Senior Vice President Buildings and Infrastructure Bob Duff stated: “We’re tremendously proud of our team and its role in creating this unique engineering structure. The expansion showcases Liverpool FC’s commitment to establishing a sustainable sports environment with a strong legacy. We congratulate Liverpool and all parties involved in delivering this remarkable project.”